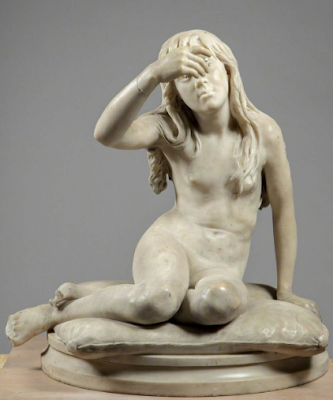 A fine classical sculpture "Seated Girl" by Ada Freeman Gell 1850-1929, from the large unseen inventory of Brighton & Hove Museums.
Ada may have had strong local connections, her  sister Louisa was born in Brighton. In the 1890's she took a studio in Roland Gardens, South Kensington and became part of a remarkable surge at that time in the number of female sculptors. This surge took those exhibiting at the Royal Academy from near zero in the 1880's to 24 out of 80 in the 1896 exhibition.

Victorian sculpture doesn't seem to have underogone the revival of interest similar to victorian architecture and paintings and none of Ada's work appears to be on public display or illustrated. In 2005 an "Exhibition Charger" by her, sold at Bonhams for £300.