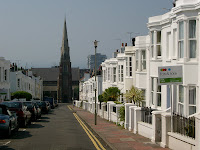 A City Council press release reports that a man who erected an outside staircase without planning permission has been fined £1,600 by Brighton Magistrates and ordered to pay £1,260 costs.
The metal staircase was put up at the rear of 36 Victoria Street (pictured above). This is not one of the several listed properties in the street, nor did the staircase obtrude on the street, which is in a conservation area; but it was positioned in such a way that anyone using it could look over the neighbouring wall into the garden and into a room of a neighbour’s property.


An application for retrospective planning permission was refused by the council and that decision was upheld on appeal by an independent planning inspector who agreed that it reduced the neighbour’s privacy.
Martin Randall, the city council’s head of planning and public protection, said: “Over a period of nearly two years the council’s planning enforcement team wrote to Mr Heath and served an enforcement notice to try and persuade him to remove the staircase. When all approaches had been ignored, the council was left with no alternative but to take court action.”
at 18:52