The first phase of the Brunswick development at the Marina is nearing completion. They are up to 6 storeys higher than the existing blocks along the waterfront but the height effect is somewhat mitigated by the stepping back of the upper storeys. It also appears that the top storeys are being finished in grey which will also help to make them less conspicuous compared with the white lower parts with the marina-turquoise balconies.

The lowest storey is dedicated to shops and restaurants. When finished the development will greatly increase pedestrian access to the West Quay and to a proposed pedestrian footbridge across the harbour entrance.

How Brighton Station was saved. 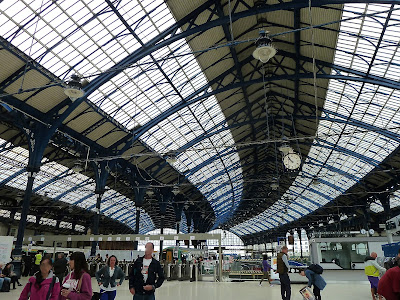 LETTERS TO EDITOR: Brilliant Brighton? Questions over the demolition of Brighton Station in Argus account

In the no. 112 Scenic station in the series ‘Brilliant Brighton’ (Argus 24.February) the writer has made a series of mistakes

The final sentence reads: “The plans to demolish [Brighton] station in the 1970s and replace it with a hotel helped rally Brighton’s Regency Society which went on to save North Laine and countless other buildings.“ The then secretary of the Regency Society, Anthony Dale, considered Brighton Station to be an ugly building and not worth preserving.

It was then that the Brighton Society (not the Regency Society which had been formed soon after World War 2), was formed and was successful in getting the station listed, which is why you see such a handsome building today. Another group which was active in saving the station was SOS (Save Our Station) who demonstrated that the plan to cover the site with a major office development was in fact illegal.

no 59 in ‘Brilliant Brighton’ states that ‘Brighton councillors may have built terrible tower blocks . . . but the poverty in central Brighton . . . was terrible’. How does building tower blocks cure poverty, poor conditions perhaps, but not poverty?

It is worth noting that the tower blocks on Albion Hill do not house any more people than the terrace houses they replaced. Shortly after the tower blocks were built they were considered unsuitable for children. The Hanover area was next on the list for wholesale demolition, but today it is a much sought after area in which to live. 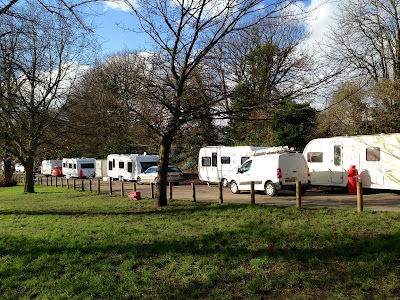 A group of about 12 vans and associated vehicles have moved from Hollingbury golf-course  to the north-east corner of Preston Park. Those who adopt this alternative life-style could perhaps be regarded as helping to solve the housing shortage; but the general tax-paying public would look more kindly on them if they were subject to the same laws as everyone else. Needless to say there was not a parking warden in sight.

It is difficult to imagine that completion of the Horsdean site will make much difference. The number of caravans in the city far exceeds the 39 pitches being provided and at a charge of at least £60 a week why would any travellers willingly exile themselves to the city's boundaries when they have become accustomed to using parks and open spaces for free?

The Brighton Philharmonic Orchestra enjoyed a record house for the 5th concert in its 91st season.  This was no doubt partly due to the programme being specially chosen for Valentine's day and partly to it being a fine dry Sunday. There were long queues at the box-office.

The event was further distinguished by Barry Wordsworth, the conductor, during a particularly passionate section of Scherezade, losing his baton. This sailed in a graceful arc into the 2nd violins. Barry continued unperturbed. No one was injured during the incident.

Other works included were Berlioz/Weber; Spectre du la Rose / Invitation to the Dance and Mascagni; Intermezzo.


This oil-on-canvas hung for many years over the staircase in Brighton museum but has now disappeared, presumably into store. This is a pity since the painter, Martin Battersby, has  strong connections to Brighton, not only on account of residence at 36 Sussex Square 1964 -1973, but also the enthusiastic role he played with the then Pavilion curator John Morley in establishing the Museum's 20thC collection. The two travelled to France together and at relatively low cost built up the impressive collection of furniture and decorative items that is on display today.

Martin Battersby, collector, historian, designer, decorator and artist, played a crucial role through the 1960s and 1970s in promoting the reappraisal of Art Nouveau and the decorative art of the '20s and '30s. He was a gifted trompe-l'oeil artist with a particular fondness for the sphinx motif.  In 1959 he painted murals on this theme for the Sphinx Room of the Carlyle Hotel, New York and two years later showed paintings of sphinx subjects at the Arthur Jeffress Gallery, London.

While at 36 Sussex Square he lavishly furnished and decorated his flat in the art deco style and painted a magnificent mural of Brighton over the common staircase. He also opened his own 'Sphinx Studio' in Prince Albert Street, as a retail outlet for his silkscreen furnishing fabrics and papers.

A new website has recently been launched which aims to record the residential occupation of the Kemp Town Estate since its inception to 1970.

For each street you can find full lists of residents by house, by year and census reports of each house. Individual history articles are provided for many of the houses which, in view of the number of famous people the area has attracted over the years, make for fascinating reading.

It is a work in progress and contributions are welcome.

Take a 15 min tour of Brighton before the age of graffiti and street clutter. . . . .