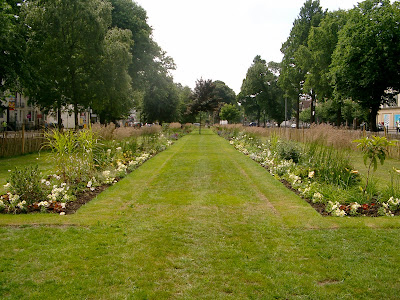 Viewed from either end of the garden(or the top of a bus) the aesthetic logic of the new landscaping is apparent and no doubt will become more so as the plants mature and the temporary fencing can be removed. However,  one still worries about the cost of maintenance, especially of the long edges. Can plants be chosen such that they are sufficiently vigorous to survive and suppress weeds in this high stress location, yet not so vigorous that they eventually swamp others or spread into the grass? It seems a difficult balancing act to achieve but if it is not, the alternative is for the expenditure of man-hours of gardening labour which the City seems ill-placed to afford. Perhaps the council is hoping for volunteers to supply the deficit as with the Pavilion and Preston Manor gardens?

Revisiting my last post on this subject, and leaving aside the question of maintenance, I can see that this scheme might be attractive to the eye of the casual passer-by, as obviously intended.  Perhaps criticism should not be aimed at the particular design but at the failure to first agree a prime objective, i.e. to consult widely about the use of the garden as an open space in one of the busiest parts of the City. In fact it would be good if there could be a wider-ranging public consultation about the whole length of the Valley Gardens to set long-term goals. The needs of traffic seem to have dominated the picture for too long. Is there really any need to have the Gardens crossed by roads three times along their length?

The changing face of Kingsway. 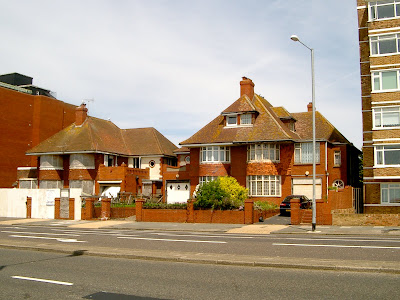 These semi-detached properties, only one still occupied, are just to the west of Viceroy Lodge on the corner with Hove Street. Only last year the last house to the east of Hove Street was replaced with a block of flats - "the Mirage". Now the inexorable march of the developers looks set to resume. My early architectural tastes were influenced by ownership of a "Bayko" building-set with which one could build 1930's style, elegant bow-fronted houses with red-tiled roofs, so I am always sad to see these perfectly good homes demolished. One hopes that some at least will be saved for future generations to admire, just as we now admire the buildings of earlier eras.

Just out of the photo to the left is the Princes Marine 'Best Western' Hotel is on the site of Hove College, which closed in 1980, and in spite of being a going concern, is looking somewhat shabby.  Further west on the corner of Princes Crescent is another boarded up property which is shown below. In the 1950's it was a Nurse's Home but subsequently became a Retirement Home until it was
vacated a few years ago. 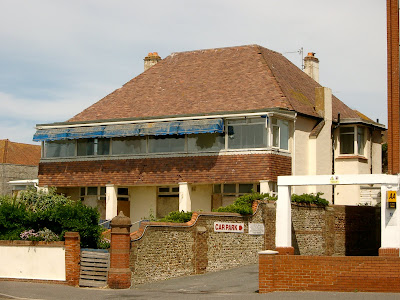 The attractive mixed flint & brick wall looks as if it dates from the original properties. It will need keeping an eye on or, directly the builders get on site, it will come down quicker than you can say 'Tescos'.
at 20:24 No comments: 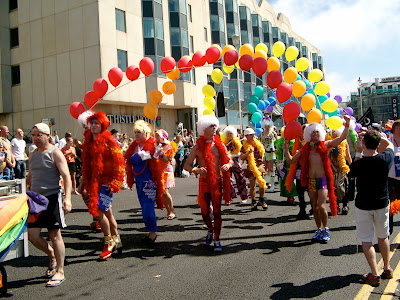 Brighton Pride&#8217;s future in doubt as another backer pulls out
I have always considered the annual Pride festival as providing the quintessential Brighton spectacle, especially when the weather is fine, but I have gay friends who want nothing to do with it, are even embarrassed by it. They say the original argument has long been won, especially in Brighton; the whole raison d'etre of the Festival lost. They want to live their lives as normal, accepted members of the community whereas Pride celebrates and perpetuates 'difference'.

On the other hand everyone (or nearly everyone) loves a parade & a party and a good excuse to close the town centre to traffic for a few glorious hours. Perhaps the time has come to try to broaden Pride's appeal, and therefore its source of funds, while  retaining the drive and talents of the regular participants, in an even grander more embracing event.
at 11:00 No comments:

The New Encyclopaedia of Brighton 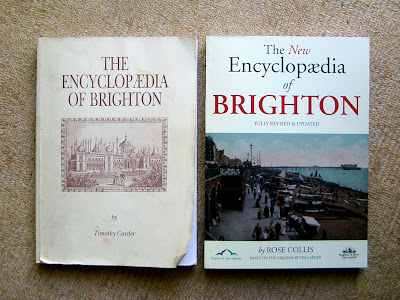 First Impressions
The new version is a pleasure to pick up and handle. The cover appears to be more durable and the paper is smooth making it easy to leaf through; the print is sharp and clear, arranged in two columns, and attractively interspersed with motifs and illustrations. I particularly liked the old street maps reproduced on the inside of the front and back covers

Detailed variations between the two versions will only become clear with extended use but here are a few of the points that have already come to light:-

I will certainly be using them in parallel for the forseeable future.
at 21:10 No comments: 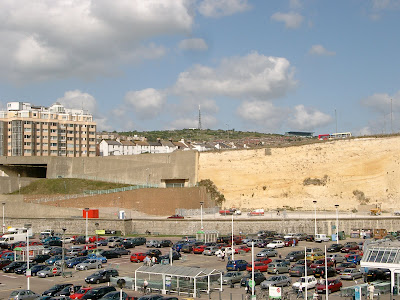 Brighton Marina tower blocks decision imminent
Will this attractive car park be saved, or will 7 tower blocks of flats be crammed in with all the attendant problems of high-density housing?

Why does there never seem to be a sensible middle way? 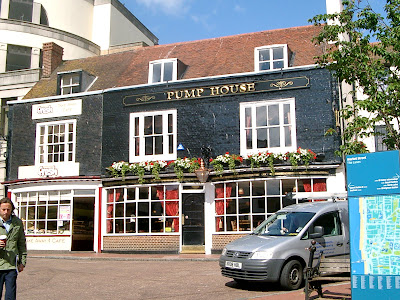 One must admire efforts to maintain business premises in as an attractive condition as possible, but painting black mathematical tiles seems to be going a bit far. Wouldn't a good washdown have sufficed?

The Pump House in Brighton Place is named for the town well which once stood in this area near the very centre of the old town. The mathematical tiles were added, to an 18th century (or earlier) building, in the early eighteen hundreds.

Part of the rear of the building is said to incorporate sections of a very thick wall of a very early date; possibly from the same era as the priory chapel which once stood nearby in Bartholomews, although this has never been reliably confirmed. 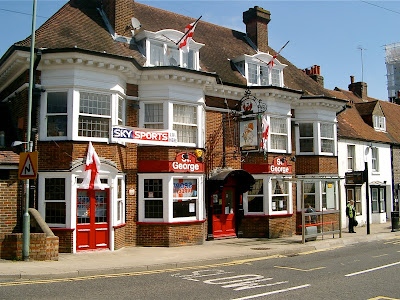 What a good time to have a pub called the 'St. George'! (High Street, Portslade Village.) 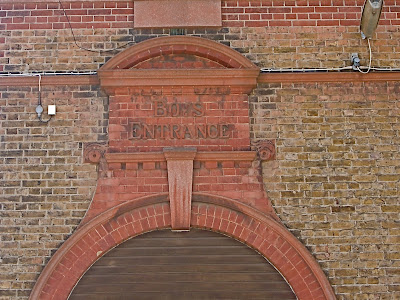 There are many other Victorian schools in cherished, effective and vibrant use around the City. They were built to last and have lasted. The Council certainly needs to explain why it would rather build a new school than make use of the purpose-built Grade II listed Connaught.
at 13:42 No comments: 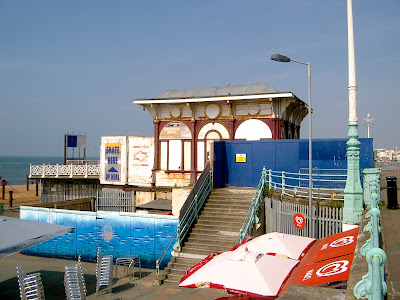 On the other hand . . . the site, as it is, is not exactly an attraction to the "historic Georgian seafront" and the West Pier Trust was never swamped with alternative proposals.
at 10:10 No comments: 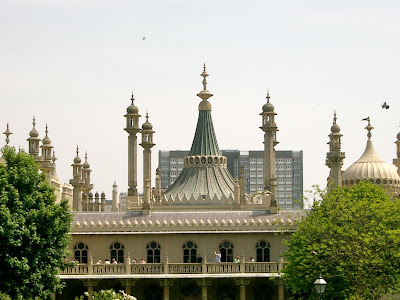 The iconic Pavilion skyline viewed  from the west was seriously marred by the 1960's fashion for plonking high-rise flats everywhere. It is especially galling that since this was perpetrated a 'tall buildings planning brief' has  been drawn up which might have prevented this unfortunate visual collision between the Regency and the 20th.C, to the detriment of the earlier.  One can only hope that when the offending block is eventually replaced it will be with something several storeys lower.

In London certain sightlines have become sacrosanct, the view from Westminster Bridge celibrated by Wordsworth, for example. Also, work is in progress on a "London View Management Framework". Perhaps now is the time for Brighton & Hove to initiate a similar study. 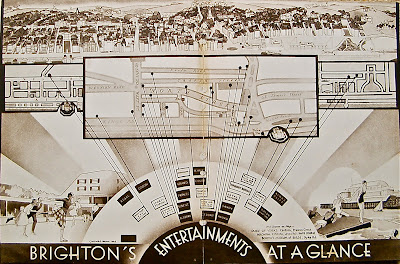 "Before I Sleep" - run extended

Due to continuing demand dreamthinkspeak's wonderful production in the old Cooperative Store, London Road has been extended again - to July 4th.

"Revenge of the Seagulls". The Argus has its annual report on the aggressive behaviour of gulls in the breeding season.

Fifty years ago herring gulls were rare in Brighton. By comparison, in winter,  large flocks of black-headed gulls were to be seen in their winter plumage, in which the black-cap shrinks to a small streak behind the eye. People would take their left-over crusts  down to the seafront and, standing along the railings, throw them to the wheeling gulls to marvel at their aerobatics. Black-headed gulls were the 'common' gull in those days and it was only occasionally that  one would see a true common gull (with its greenish legs), a black-backed gull or a herring gull, the latter two standing out from the others because of their impressive size.

It is remarkable how today the situation seems to have reversed, with the herring gull now completely dominant in the City. Various explanations have been offered for this: the cliffs to the east have been progressively smoothed to minimise the danger of falling chalk and the gulls have had to resort to nesting on buildings; while over the same period of time, the galvanised metal dustbin has been replaced by the easily plundered plastic binbag thus ensuring a ready supply of food throughout the year. It is said that the population of a species expands to meet the food supply available and perhaps, now that the Council has improved the system of refuse collection, we can expect to see a steady decrease in numbers.

This still doesn't explain what has happened to the black-headed gulls unless it a straight-forward case of competition and the more aggressive herring gull has simply bullied them away. . .
at 18:40 No comments: 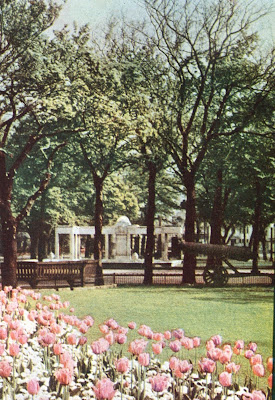 This view looking north from the Victoria Fountain in about 1935 shows, on the right, the old cannon that was referred to in an earlier post.

Does anyone know what happened to it?

It may have come from the old seafront battery for which Cannon Place, and Artillery Street (now under Churchill Square), were named.

Had it survived to the present day it would surely be a prized relic of the City's past.
at 17:09 3 comments: 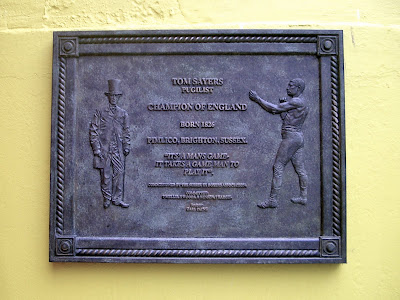 The plaque to Tom Sayer, bare-knuckle prize-fighter, which was unveiled on April 17 on a wall of the Guitar, Amp & Keyboard Shop in North Street. This location was chosen as it is close to where Tom was born in the warren of 19th century slum streets that ran between Church Street and North Road. Most of this area has been twice redeveloped since Tom's birth so no trace of his birthplace remains.

Tom attended the Middle Street School, trained at the White Horse at Rottingdean and the Druid's Head in Brighton and became the last English heavyweight champion before the introduction of the Queensbury rules.

The plaque was financed and commissioned by the Sussex Ex-Boxers Association. 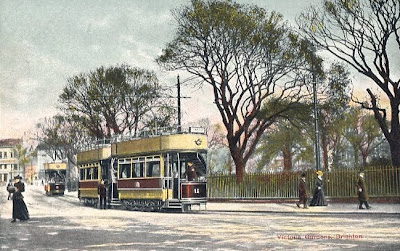 Brighton's tram system which opened in 1901 with the route from Valley Gardens to the depot in Lewes Road ran anti-clockwise around the Valley Gardens until 1929. The whole system was completed by 1904 with routes to Brighton Station, Tivoli Cresent, Fiveways, Race Hill, and Rock Gardens. In 1929 the direction around the Valley Gardens was switched to clockwise and the last tram ran in 1939 to be replaced by trolley buses and motor buses, these being considered more flexible and versatile.

It is ironic how today's traffic conditions have constrained modern buses to follow tram-like bus-lanes. Had anything significant of the tramway infrastructure survived it would no doubt have been seized on and modernised as a partial answer to the City's congestion and pollution problems.

Conspicuous relics of the system still to be seen are the shelters in Ditchling Road (Florence Place), in Dyke Road (reservoir), in Queens Park Road (The Pepperbox) and Ditchling Road (opposite Surrenden Road); the last two being Grade II listed. A further shelter has been refurbished and put back into use at Amberley Chalk Pits Museum. 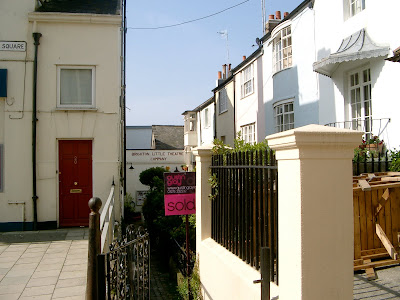 Seventy years ago in the darkest days of the war, the year of Dunkirk, Brighton Little Theatre began, and is still delighting audiences with its quality productions in its unique, intimate theatre building. One WW2 poster admonished the population to: "Stay calm & carry on", and perhaps that is just what Brighton's lovers of the stage were endeavouring to do in 1940.

It is continuing its 70th season with Romeo & Juliet, 22nd to 26th June, in Clarence Gardens. It then travels to repeat the play at the Minack Theatre, Cornwall, 5th to 9th July, and then returns with it to the grounds of Lewes Castle 21st to 24th July.