Have you ever wondered what happens to your recycling after it is collected? Veolia invites visitors from across the city to come along and find out all this and more at their ‘Waste & Recycling Wonder Open Day’ on Thursday 10th November; at Hollingdean Materials Recovery Facility from 10am - 3pm.

Guided tours will be running throughout the day with plenty of opportunities to ask questions and discover what happens at the modern integrated waste management facility. Wonder Day tours must be pre-booked by calling: 01273 544205

Veolia South Downs has a 30 year contract for the delivery of an integrated waste management service across Brighton & Hove and East Sussex. Working in partnership with both East Sussex County Council and Brighton & Hove City Council, it is committed to providing a sustainable approach to managing the area’s household waste. 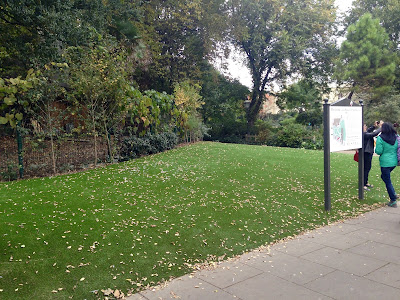 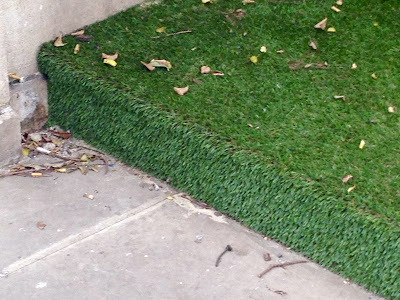 Formerly the Gardner Art Centre, which closed in 2007, this unique Grade II* listed venue on the University of Sussex campus has now reopened.  In the intervening period it has undergone an  extensive multi-million pound refurbishment and modernisation. It is now named after the former chancellor of the University, Richard Attenborough, as the 'Attenborough Centre for the Creative Arts' (ACCA).

The building is now fully adaptable to hosting a wide variety of events and the programme of forthcoming events up to March next year can be found here.

Vote for your Park 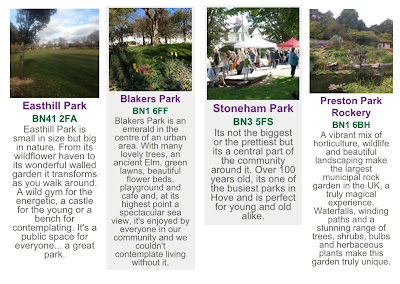 Residents are being urged to vote for 4 city parks nominated by local enthusiasts in a national competition. The competition is being run by Fields In Trust – formerly the National Playing Fields Association.

The parks are Preston Park Rockery, Easthill Park, Stoneham Park and Blaker’s Park and votes can be cast online at:- http://www.fieldsintrust.org/bestpark/southeast

Winners are expected to be named in an awards ceremony on November 30.

Chair of City in Bloom Denise Taylor said: “What a brilliant opportunity for us to show our appreciation for four of our excellent parks and highlight some of the excellent urban green spaces that continue to be an important part of city life. The work that goes into the upkeep of these parks is critically threatened and we need to showcase what the council and volunteers in this sector can pull off even in this difficult economic climate.”
at 17:24 No comments: 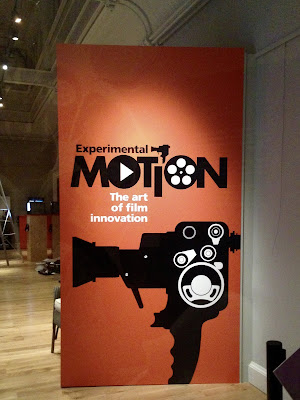 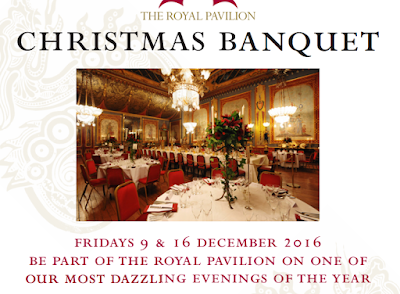 The Banquets of the year, are now sold-out. But the Pavilion should still be well worth a visit in the run up to Christmas. We have heard that extensive festive decorations including several decorated trees are planned throughout the building. The largest tree will be positioned in the Great Kitchen. The trees will be decorated to reflect the decor of the room in which they are placed and the fabulous dining room will be set as for a Christmas banquet.

Father Christmas will be relocated to Preston Manor.

To be a Farmer's Girl

Reminiscences of farming life in Yorkshire, Sussex & Cornwall during and immediately after WW2.

Cleaner streets on the way? 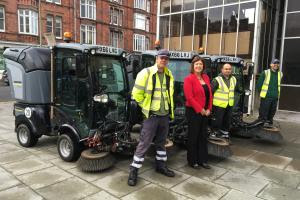 The council has launched four new multi-functional all-season machines that will allow it’s street cleansing teams to clean the city’s pavements faster and with greater frequency.

The small, compact sweepers can also be quickly converted in minutes into grass cutters, snow ploughs or gritters, enabling them to be used all year round.

Cllr Gill Mitchell, chair of the council’s Environment, Transport & Sustainability Committee, said: “They are small, lean cleaning machines that can travel on virtually any pavement and will allow our teams to blitz our high density areas more often and with more power.”

Using the time saving machines will also mean street cleansing teams being able to concentrate on other areas of the city.

The machines will be used in the main city centre area and other busy streets throughout Brighton and Hove. 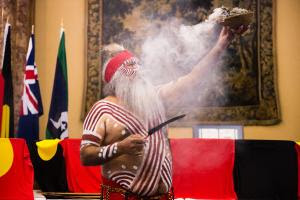 A special Handover Ceremony to mark the return of aboriginal ancestral remains from Brighton Museum to Australia has taken place at Australia House, London.

The ceremony on Oct.14, organised by the Australian High Commission, saw the ancestral remains returned to the Ngarrindjeri Community of South Australia, from whom historical information suggests they were taken. The remains were received at the ceremony by Mr Major Sumner, Elder and representative of the Ngarrindjeri Community. The ceremony was attended by Brighton & Hove Councillor Alan Robins and Director of the Royal Pavilion and Head of Museums and Arts, Janita Bagshawe.

The remains were originally donated to Brighton Museum by keen scientist and collector, Frederick William Lucas in November 1925. They were part of a large group of osteological and ethnographical items, most of which had been on loan to the Museum since September 1922.

The repatriation process for Brighton started in 2005 when the Australian Government requested the return of five Australian Aboriginal Ancestral Remains held by Royal Pavilion & Museums: four remains in the Natural History collection, and one in the World Art collection.

In September 2008, the then Culture, Recreation & Tourism Cabinet meeting of the city council agreed to return the Natural History remains. These were collected by Major Sumner and George Trevorrow, representatives of the Ngarrindjeri Community, on Friday 15 May 2009. The occasion was marked by a ceremony outside Brighton Museum & Art Gallery.

In May 2009, the Full Cabinet of the city council agreed to return the World Art remains.

The council has received a Handover Certificate, a formal record of the transfer of the remains to the Ngarrindjeri Elders representing their community. 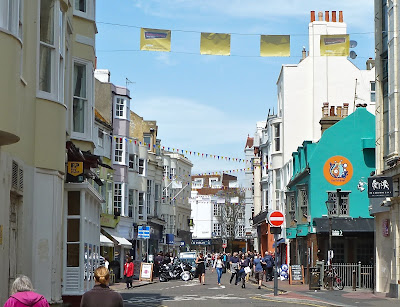 CCTV cameras are to be introduced in an attempt to stop flytipping in Brighton & Hove streets and will be funded with money raised by fining people for a range of environmental crimes.

The authority has been able to issue fixed penalty notices for fly tipping since May 2016 under the Environmental Protection Act 1990. The maximum fine imposed by the council is currently £300.
Alternatively it can prosecute via the courts under the same legislation.  The maximum penalty from a Crown Court is up to five years imprisonment or an unlimited fine.

The move is part of the city council’s drive to tidy streets and improve the environment.  In February this year it started using contractors 3GS to issue fixed penalty notices for environmental offences.  In the first six months they issued 1082 penalty notices, compared to just 80 in the whole of the 2014/15 financial year.

Environmental crimes common in the city range from flytipping, flyposting and littering to unauthorised distribution of leaflets. Businesses are causing problems illegally dumping refuse in communal waste or recycling bins, increasing the city’s waste and driving down recycling rates.  All businesses are legally obliged to have a waste disposal contract with a licenced operator.

The council says it will respect people’s privacy but use CCTV in a very targeted way to tackle anti-social criminal behaviour at problem locations and help it to meet legal obligations to keep areas free of litter and refuse.

A report on the matter is going to the environment, transport and sustainability committee on October 11.  It can be seen here among the agenda papers for the meeting.

See also:-
Fly-tipper caught in the act by helicopter.
Another litter rant.
Fly-tipping.

In place of 11 and 11b is proposed a five storey building providing 26 residential units with offices at lower ground floor level. This application supersedes an earlier application for a boutique hotel with a public restaurant on the ground floor. The latter facility would have at least had the benefit of boosting the vibrancy of the square but the applicant now feels that housing demands should take precedence.

At the time of the original application in 2011 many people felt that the development  provided a once-in-a-lifetime opportunity to provide new access to the St. Nicholas Open Space. By cutting an opening in the wall and installing a permissive footpath alongside the new building, or under its first floor, an underused section of the Open Space would have been made considerably more accessible, and footfall in the square would have been increased. However, notwithstanding that the idea once found favour in the Council planning department the idea was eventually defeated by the forces of conservatism.  See earlier posts:-
A new footpath for St. Nicholas?
New Queen Square hotel - planning application