Tale of a Lavender Street resident.

A glimpse of the lives of working people in Brighton before and during the second world war.

Ron was born around 1925 and spent a 'poor but happy' childhood in Lavender Street. His father worked for the Parks Department on a casual basis and income was erratic and weather dependent. They were often so poor that his mother would pawn his Sunday suit during the week hoping to redeem it in time for Sunday school the next weekend. If she failed, he would be sent off to spend the day on the beach instead.

They moved to Sloane Street (now demolished) between the corporation yard (now the telephone exchange) and the primary school. When his mother got behind with the rent, the bailiffs were sent in and the house was boarded up while Ron was at school and his mother out at work. On returning home she borrowed a hammer from a neighbour and got Ron to climb over the back wall and break in. They settled themselves into the house again. This happened more than once.

During the war, Ron’s mother had a job painting bridges on the railway. Ron would have been around 15 when a string of bombs hit Kemp Town and the area was badly damaged. A girl who Ron was keen on was killed at the baker’s shop where she worked. He joined the army and, as a very tall and imposing soldier, was always put on guard duty. He told the story of guarding the entrance to the railway station on Trafalgar Street with a rifle with no ammunition and a wobbly bayonet. When an officer came down the dark stairs, Ron challenged him with the customary ‘Halt! Who goes there!” only to find his bayonet had fallen out of his rifle.
Ron went on to join the sweep across Europe into Germany after the Normandy invasion.

In peacetime he worked as a butcher at Sainsbury’s in Portslade for many years until a heart attack and by-pass surgery slowed him down and eventually he retired. He had an allotment after the war, first on Whitehawk Hill Road and then when the site was cleared to build the Catholic School there, he was moved to the Whitehawk allotment site. He spent a couple of hours every day on his allotment plot in all weathers, 'keeping out from under his wife's feet'  until he could no longer climb the steep hill to it. He died in 2015.
Contributed by Andrew Doig.

Council video shedding some light on the general approach they propose to take. 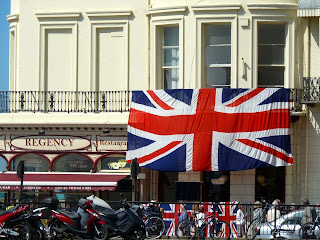 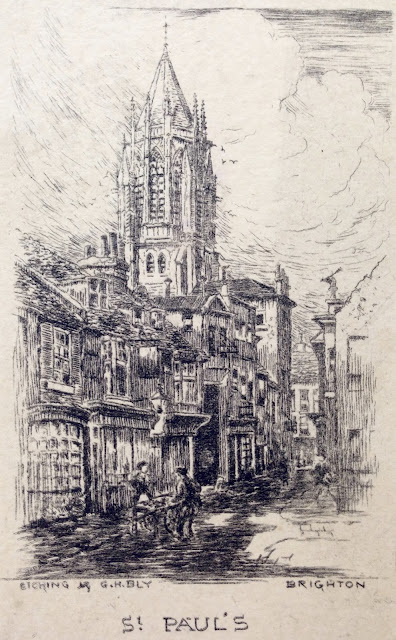 An evocative etching by G.H.Bly reproduced on a postcard in the collection of the Royal Pavilion & Museums. It is reminiscent of the London etchings of Gustave Doré.

The viewpoint appears to be looking east along Lower Russell Street towards West Street.

St. Paul's was built for fishermen and their families and opened in 1848.