Royal Pavilion to be on BBC2 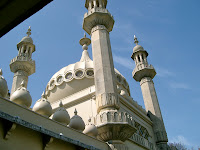 Upstairs/Downstairs at the Royal Pavilion.

Look out for the Royal Pavilion on BBC 2 on Friday March 11th.
Brighton’s Royal Palace will be featured in a new BBC series which follows in the footsteps of a young Queen Victoria.
Royal Upstairs Downstairs presenters Tim Wonnacott (best known for Bargain Hunt) and TV chef Rosemary Shrager explore just what went on behind the scenes of Queen Victoria’s many Royal visits.
Queen Victoria chose to spend her first Christmas as Monarch with her Uncle King George 1V at the Royal Pavilion. The year was 1838 and Victoria was just 19.
The journey down from London took 76 hours and involved five sets of horses and the household staff was increased from 25 to more than 200 for the Royal visit.