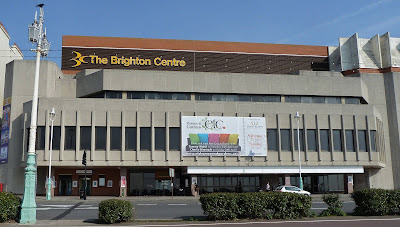 The Brighton Centre, designed by Russell Diplock, was opened in 1977 on the site of a terrace of Victorian buildings demolished in 1958.  These included the ornate & lavishly decorated 1912 Palladium cinema  on the corner of Russell Street, now also obliterated except for a short unremarked length running north  from Russell Road and acting as a service road for Churchill Square. 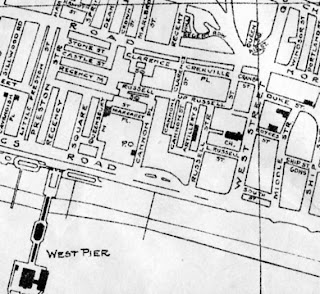 Considered in isolation the Brighton Centre is not a bad building, it has certainly been functionally successful, but its design has been criticised as "lacking wit" for a place like Brighton and being unsympathetic to its surroundings. It is of an alien colour and has over-strong "horizontals" compared with the rest of the historic seafront.

Like many other Brighton projects, a £400M redevelopment scheme, seems to have been deferred indefinitely. This included a plan to link Churchill Square with the Centre, presumably by a pedestrian bridge over Russell Road, and then by escalators down to Kings Road, thus restoring the access once provided by Russell Street and substantially increasing the footfall to both venues. 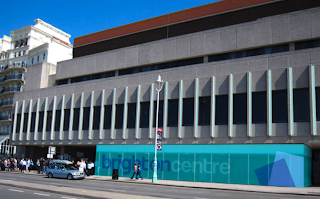 For the time being it seems we must be satisfied with a mere £1M pound revamp. The Council has made an application (BH2011/00442) for alterations to the front entrance lobby and doors, including new glazing to the underside of the canopy and for an extension at third floor level onto the existing balcony.