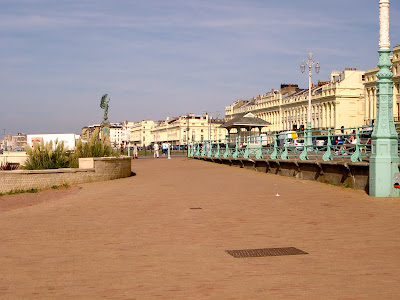 The cliffs of Sussex, formed where the South Downs meet the sea, rise abruptly just west of Eastbourne and quickly reach their maximum height of 500 feet at Beachy Head. Seventeen miles further west they taper down to zero at the Brighton/Hove boundary where they meet the Sussex coastal plain. 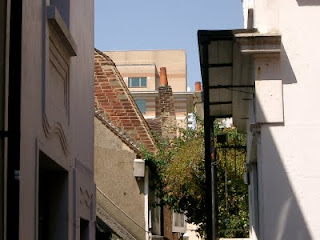 An article in today's Argus reports that residents of this lane are clamouring for it to be gated every night between 11pm and 7am say, to reduce the incidents of rowdyism, vandalism and anti-social behaviour. This lane is a very useful shortcut and, while I have every sympathy with the suffering residents, it seems very unfair that the law-abiding public should have a long-established right-of-way barred to them because of a few drunken louts. Surely the answer is more active policing, at least for a while; and I disagree with some commentators that this would necessarily be too expensive. The occasional appearance of a uniformed police officer at random times during the critical hours might do wonders. The frequency of patrols could then be gradually scaled down. It should at least be tried.
Many people might not know, or have forgotten, that when the new Hove Town Hall and multistorey car park opposite were built an under-road tunnel was provided linking the two so that in inclement weather people attending functions at the Town Hall could arrive dry and unruffled. This was rapidly colonised by drug-dealers and rough-sleepers and was promptly closed. A prime example of society's misfits degrading life for the very people whose taxes they depend on for their weekly handouts.
at 20:45 No comments:

Many of Brighton's street nameplates are gradually being replaced by cheap-looking plastic things. I am very incensed about this. The following letter which I am sending off to anyone I can think of, expresses what I think about it.:-

"I am writing in response to an article in the Argus which reports that historic street nameplates in the Hanover area are being replaced with modern plastic versions.

I consider that, even in a weathered state, the original cast nameplates retain their elegance and readability . They suggest solidity, permanence, continuity with the past and, being of a similar period to the Conservation Area, they make a distinct contribution to its historic character. They were also very probably produced in Brighton foundries of the time which adds to their historic interest.

I protest most strongly at their removal unless they are to be replaced with faithful reproductions."

The Argus article which prompted this can be read here.
at 20:25 No comments: