Alberto was born & studied in Cuba but has now lived in Brighton for 10 years and is a regular participant in the Artists Open Houses May festival. This and other examples of his work are to be seen at the Cube Gallery in the Southdowns Heritage Centre, Hassocks. 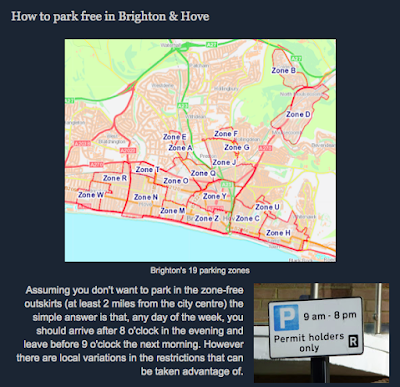 In under two years the post "How to park free in Brighton & Hove" has become Brighton Bits's most viewed post at just over 10,000 views.
at 21:47 No comments:

Email ThisBlogThis!Share to TwitterShare to FacebookShare to Pinterest
Labels: parking 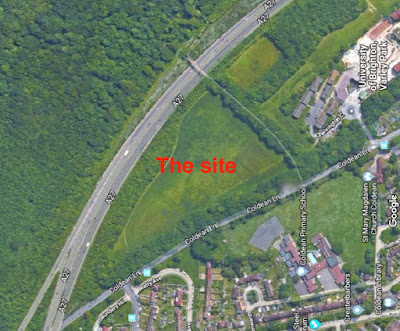 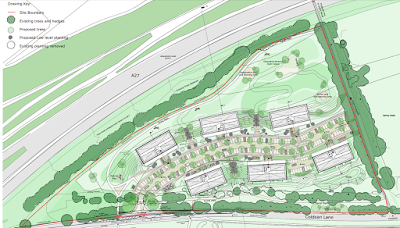 This is the largest development so far in the council's 'Homes for Neighbourhoods' programme for providing housing on council-owned land. The applicant is the 'City of Brighton and Hove Design & Build Company' which was incorporated in 2017 to implement this programme.  The documentation is high quality and extensively detailed.

An outline planning application BH2018/03633 for the development of Toad's Hole Valley has been filed. It proposes: 880 much-needed dwellings; a secondary school; office/research/light industry units; a doctors' surgery community building, and public open space (including for food growing and play space).

It also includes  enhancements and alterations to the Site of Nature Conservation Interest to the east of the site and associated landscaping.

The most controversial proposal seems likely to be  the suburbanisation of King George VI Avenue.  Nearly all A23, A27 traffic destined for Hove and Portslade funnels down this road.  The 3 light-controlled vehicular accesses is a welcome reduction from the 7 suggested earlier for the development. This will still result in some rush hour delays but in the search for new housing maybe this is just one of the trade-offs the city has to accept.

Comments can be filed up until the application goes before the planning committee in the spring.

Email ThisBlogThis!Share to TwitterShare to FacebookShare to Pinterest
Labels: Festival

For where we are now see: Shelter Hall taking shape 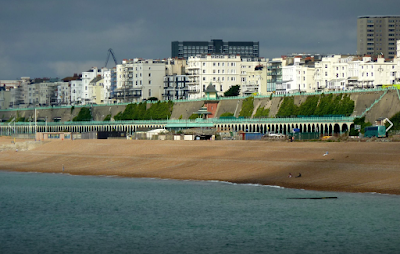 BHCC's second bid to the Heritage Lottery Fund (HLF) to support the Madeira Terrace restoration has been unsuccessful. As before the HLF said there was nothing wrong with the bid, but they simply don’t have enough funding for all the projects that applied. Their funding has been cut by 50% and this funding round was very competitive. The funding requests from all applicants greatly exceeded the budget available.

Work is  continuing on the first three crowdfunded arches (at the western end of the terrace) aiming towards an on-site start date of spring 2019.

At the start of January 2019, an office and community hub will be opened in a shipping container on Madeira Drive. This space will help raise awareness of the restoration project and offer a base to raise funds during events.

Heritage funding and other types of funding will continue to be sought possibly including another bid for HLF funding in March 2019. 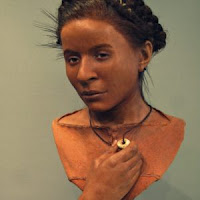 Named for its major benefactor, the 'Elaine Evans Archaeology Gallery' opens to the public on 26 Jan.2019.

This is the first new gallery for 20 years to be devoted to the story of our ancestors who lived in Brighton & Hove from the Ice Age to the Saxons. It results from several years of work following a public petition from the Brighton & Hove Archaeology Society of which Elaine is a member.

At the heart of the exhibition will be seven forensically accurate 3D facial reconstructions revealing the faces of people, some of whose remains were found in and around Brighton & Hove from the Ice Age to the Saxon era.

Using modern scientific technology, research into the lives of these people has discovered a wealth of mystery, drama and tragedy through childbirth, malnutrition, toothache and possibly murder. Now you can see what they looked like and learn their real-life stories. 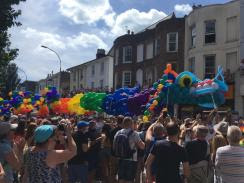 A consultation opens today on the future of the Pride Village Party which has been an annual popular event in and around St James’s Street for many years.

Up until 2015 the event was not organised officially by either the council nor by Pride itself, instead, visitors independently congregated in the area attracted by the LGBTQ+ bars and clubs that exist there. Since 2015 Pride organisers have managed the PVP and have put resources in place to manage the disruption to local people including additional security personnel, street cleaning and toilets. It is now a ticketed event limited to certain parts of St James’s Street and neighbouring roads.

The council is now seeking the views of residents and businesses on the future of the PVP, including whether it should continue, where it should take place and any other changes people would like to be made to the event.

The consultation closes on 31 Jan 2019 and the responses will be reported to the Tourism, Development and Culture committee in March 2019.

Network Rail are developing major proposals to upgrade the Brighton Main Line – one of the most congested routes in the country –  to provide more reliable, faster and more frequent services on the line and its branches.

Key to the upgrade are proposals to remove the most challenging bottleneck on Britain’s railway network at the ‘Selhurst triangle’ and East Croydon station as part of proposals for the East Croydon to Selhurst Junction Capacity Enhancement Scheme.

To check out the plans, the Brighton consultation will be on: