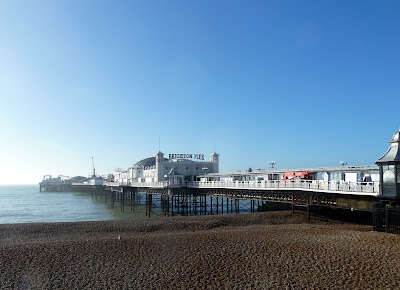 Over the coming winter Brighton Palace Pier Company is to invest £1.3M in revamping the bar and restaurant facilities.

With 4.65 million visitors a year the Pier is the fifth most popular free destination in the UK.

It is good to know its immediate future is secure. 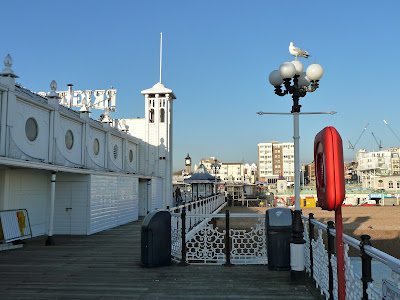 One of the city’s biggest regeneration plans of recent decades has today been granted planning permission by the BHCC planning committee by a unanimous vote.

Permission covers the redevelopment of three adjacent sites along Lewes Road; the former Preston Barracks site, the current car parks of the University of Brighton’s Watts House and Mithras House.

Preston Barracks site - a seven storey research laboratory, 534 bed spaces of student accommodation in three blocks of between 13 and 15 storeys; 369 residential units consisting of 45 studio apartments, 111 one-bed, 192 two-bed and 21 three-bed units in eight blocks ranging from two to 10 storeys, ground floor workshop, commercial and retail space and 156 parking spaces, plus cycle parking and public realm works. 15 per cent of the residential units will be affordable properties aimed at local people in housing need.


A new public footbridge across Lewes Road will unify the campus and make the busy route less of a barrier for local communities.

As part of a planning agreement with the city council, developers will pay £1.7m for local recreation and open space provision, £371,000 for local employment schemes, £255,000 to improve local sustainable transport and £83,000 for improving or expanding five local nurseries.

Simulated fly-through of the RSCH redevelopment

The video is derived from a virtual reality modelling of the new development which has been created to aid staff familiarisation and training.

The VR model reflects all the information in the redevelopment’s Building Information Modelling (BIM) database. The VR model will continue to be updated until the end of the hospital redevelopment as new equipment is bought and the interior design of the new buildings takes shape.

This work on VR has been short-listed for Building Magazine’s BIM initiative of the year.

Until it was demolished in the early 1960s this general shop on the corner of William Street had been in the Corder family for 50 years. The last occupant was a Miss A. Corder.

New A & E Department gets go-head.

The planned expansion of the RSCH Accident & Emergency Department has been approved by the city’s Planning Committee.

The current department has insufficient patient capacity and failed to meet performance standards for a number of years. The new plan will provide space for 70 short-stay assessment beds over two floors, and for complete refurbishment of the A&E department. The proposal aims to provide a much-needed fit-for-purpose facility, reduce pressure on scarce beds in the main hospital, and improve clinical care.

The new 70 bed Short Stay Unit will care for both surgical and medical patients who need to be admitted to hospital for 48 hours or less.

The new unit  will be housed  in an extension of the existing A&E Building on Bristol Gate. It will be located above the department’s ambulance and car drop off and will stand on columns to allow access for vehicles and pedestrians to the front door of A&E.

North Street is going to be closed to through traffic from tomorrow, Monday 18th September until the middle of November.

All buses will be re-routed via King's Road and West Street.

It was last dug up in 2007 for renewal of Victorian water mains and apparently not reinstated properly.

The work is being done in 3 phases starting at the Clock Tower.

Phase 2
Phase 3
It will interesting to hear of any effects the lack of buses has on footfall.


Cath Kidston, the ‘Modern Vintage’ international retailer, has signed a lease with Redevco, for 1,700 sq ft of ground floor sales plus ancillary storage, at 6-7 North Street.  Cath Kitson, which began in 1993, has been trading at East Street Arcade since 2011. The move is being made in search of more display space.

6-7 North Street is part of the Hanningtons estate currently being redeveloped and refurbished by Redevco.

It is unfortunate that North Street's gain has to be East Street Arcade's loss. 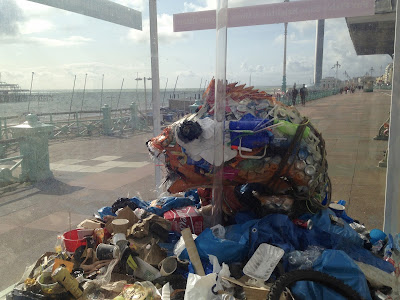 The sculpture isn't rubbish - it's clever - it's just made of rubbish.

Following the demolition of Timpsons and work to reveal and restore the historic 17th century Pugets Cottage, Redevco’s contractor Westridge has started to refurbish Huntingdon House on North Street. Huntingdon House is named after the Countess of Huntingdon's church which was demolished in 1972.

Redevco started redeveloping the 1.3 acre site, which includes the former Hanningtons department store or ‘Harrods of Brighton’, in February.

A building at the rear of the site has been demolished and existing space reconfigured and significant investment and improvements should appear over the next few months including larger, bolder and more permanent signs to Meeting House Lane.

It is expected that by the end of Summer 2018, Brighton will have a new Lane and new spaces for shops, restaurants and cafes.

The Legend of the Devil's Dyke

Six hundred years ago or more or, if you please, in days of yore,
A wicked wight yclept 'Old Nick', renowned for many a wanton trick,
With envy from the Downs beheld the studded churches of the Weald.
Here Poyning's cruciform and there, Hurst, Albourne, Bolney, Newtimber.
Cuckfield and more with towering crest, quae nunc prae scribere longum est.
Oft heard the undulating chime, proclaim aloud 'twas service time.
While to the sacred house of prayer went many a pious worshipper.

"Can I with common patience see these churches and not one for me?"
"Shall I be cheated of my due by such a sanctimonius crew?"
He muttered twenty things beside and swore that night the foaming tide,
Led through a deep and wondrous trench, should give those pious souls a drench.

Adown the West the steeds of day, hasted merrily away,
And night in solemn pomp came on, her lamp a star, a cloud her throne.
So Nick began with much ado, to cut those lofty downs in two.
At every lift his spade threw out a thousand waggon-loads no doubt.
Oh! had he laboured to the morrow his envious work had wreaked much sorrow.
The Weald, a wide and beauteous place,  o'erwhelmed a sad and watery waste.

But so it chanced a good old dame, whose deed has long outlived her name,
Waked by the cramp at midnight's hour, or just escaped the nightmare's power.
Rose from her humble bed when lo, she heard Nick's terrible ado,
And by the starlight dimly spied that wicked wight and dyke so wide.

And, as with wonderment amazed, at workman and at work she gazed,
Swift cross her mind a thought there flew, that she by stratagem might do,
A deed which luckily would save, her county from a watery grave.

Forth from her casement in a minute, a sieve with flaming candle in it,
She held to view, and simple Nick, who ne'er suspected such a trick,
Scared at the sight of a new sun, fled, his work undone,
And muttering curses that the day should drive him from his work away.

Night after night our heedful dame, watched, but again Nick never came.
Who now dare call the action evil, to hold a candle to the Devil?