THE VOTE: Cllr Robert Nemeth on the King Alfred in Hove

Some interesting background on the King Alfred project and various other schemes. 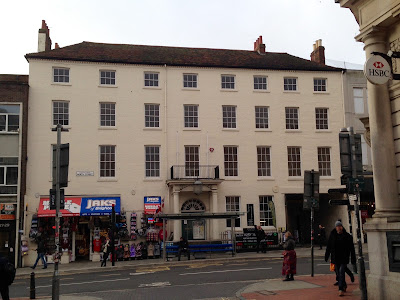 The Clarence in North Street is still looking much like it did 230 years ago when it was known as the New Inn. It is the only remaining example of the inns which once lined North Street. The frontage is of mathematical tiles, now painted. In 1811 it was extended westward over the coach entrance. The magistrates court was established here in 1808 and returned in 1821-23. In 1831 it was renamed in honour of William IV. It was Grade II listed in 1971 and closed as a hotel in 1972. In 1979 it re-opened as the headquarters of a building society.

It was restored c1990, when a Georgian Revival shop front was inserted on the left which could be said to balance the coach entrance on the right. Unfortunately, this effect is vitiated by commercial festoons, and the elegant entrance, the architectural highlight of the building, is bisected and obscured by the siting of the bus-stop.

The coaching entrance provides a little used passageway to the Lanes and still retains some features of the coaching era. It is surely ripe for some improvements concurrently with the Hannington Lane development.

Following  a year-long competitive dialogue between two bidders and specialist council officers, overseen by councillors from all parties, Crest Nicholson, in partnership with the Starr Trust, have been selected as the preferred bidders to redevelop Hove’s King Alfred Leisure Centre site.

The decision was made at the Policy and Resources committee meeting on 21 January 2016. Bouygues were the other contenders.

Subject to future design development, public consultation and planning permission, the scheme would include a modern new sports centre costing around £40m. This would be paid for by a development of 560 flats, and around £8m of council money. The flats would be in four main blocks, the highest of which would be 18 storeys, and 20% of them would be affordable

The sports hall would have space for eight badminton courts compared to five in the current centre. There will be a 120-station gym, plus 15 spinning bikes.

This postcard from  the early 20thC shows, in the bottom LH corner, an exposed sea-wall on the east of the West Pier. It is of similar design to that on the west side of the pier,  a gap having been left between them to accommodate the already existing Pier. The build-up of shingle has presumably rendered them redundant, which is a good thing inasmuch as the i360 is now occupying the self-same gap.

The Future of Brighton Seafront.

Roger Hinton, Chairman of The Regency Society and the Conservation Advisory Group talking sense on the various proposals for the Seafront.