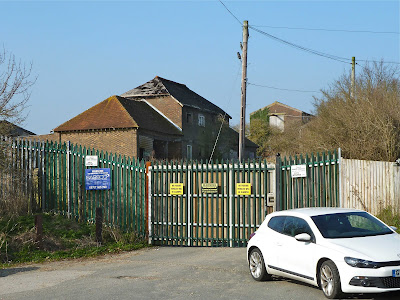 Patcham Court Farm, once Brighton's gateway to the Downs, became an island site in the 1990's with the building of the A27 Brighton by-pass, opened 1996. Being south of the A27 the area is outside the boundary of the South Downs National Park and thus scheduled for re-development.

The City Council, which owns the site, originally designated it for office building but this was undermined by the decline in market interest in this type of development. It was subsequently suggested for a 900 space park & ride site to ease the City's traffic problem but this would have required the demolition of 5 houses and the loss of 35 allotments, besides producing an enormous increase of traffic in a still semi-rural area. After a vigorous campaign  of opposition from local residents, allotment holders, local councillors, and the Preston & Old Patcham Society, the plan was withdrawn in Jan 1996.

The latest proposal is from the DeVere hotel group which owns the Grand in Brighton and comprises a 128 bed "Village Hotel", health & fitness facilities, a restaurant and some office space. This would meets the Council's prime objective of providing extra employment in the area, maybe some 275 new jobs, but again would generate significant extra road traffic. The Preston & Old Patcham Society maintains that the site is only suitable for low-rise housing.