BHCC planners have published the first of a regular series of newsletters dealing with planning issues around the city. 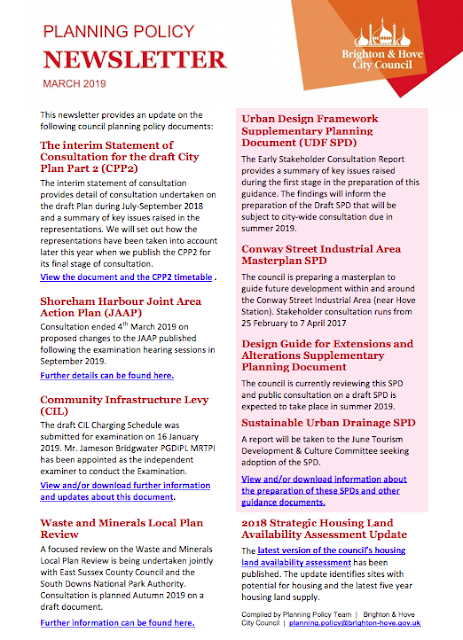 The Mary Clarke Statue Appeal now has its own facebook page. See: https://www.facebook.com/MaryClarkeStatue/

From 1909 until 1910, Mary Jane Clarke was an Organiser for the Women's Social and Political Union - the Suffragettes.

A talented decorative artist, she had escaped an abusive marriage and was physically frail. However, she was no less brave and committed to the suffrage cause than her famous sister, Emmeline Pankhurst, and her nieces, Christabel and Sylvia, who she had cared for in childhood.

Mary spoke at many meetings, and was imprisoned three times. On 18th November 1910 she attended the ‘Black Friday’ events where, over a period of six hours, 300 women outside Parliament were brutally beaten and sexually assaulted.

Shortly thereafter she was arrested for breaking a window and imprisoned for a month. She went on hunger strike and was forcibly fed. After release from prison she travelled to Minnie Turner's boarding house in Brighton to a welcome meeting, then returned to London to spend Christmas with her family.

On Christmas Day 1910, two days after her release from prison, she collapsed and died from a brain haemorrhage, almost certainly as a result of police violence and forcible feeding in prison.

Mary’s death never received the publicity of Emily Wilding Davison’s death in 1913, nonetheless her obituary rightly called her “the first woman martyr who has gone to death for this cause.”

It is hoped to site the statue in or near the Pavilion Estate which has strong links with the suffrage movement.

There is no memorial to Mary anywhere in the country.