From the Daily Mail :- 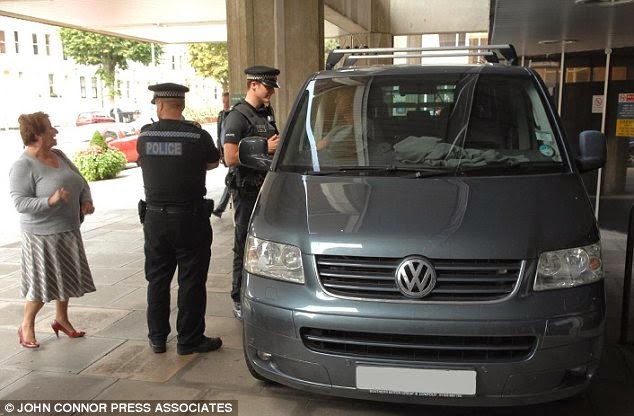 An irate homeowner has parked his van in the entrance to Hove Town Hall as a protest against travellers monopolising his local park. The van has been in its current position since about 1pm yesterday.

Hitting out at the travellers who have taken up residence in Withdean Park, its driver said: 'I am sick and tired of double standards.
‘I do not care whether it's a traveller or the Queen herself.
'It's illegal activity in a public place and Brighton and Hove City Council is doing nothing about it.'
He  said the travellers had ruined his neighbourhood; were aggressive towards dog walkers; drove cars and motorbikes around the park and even left human excrement and rubbish strewn in the bushes.

The police regard it as a peaceful protest and the van is not unduly obstructing the doorway. Cr Dawn Barrett took the driver a cup of tea. He is planning similar protests in the future. 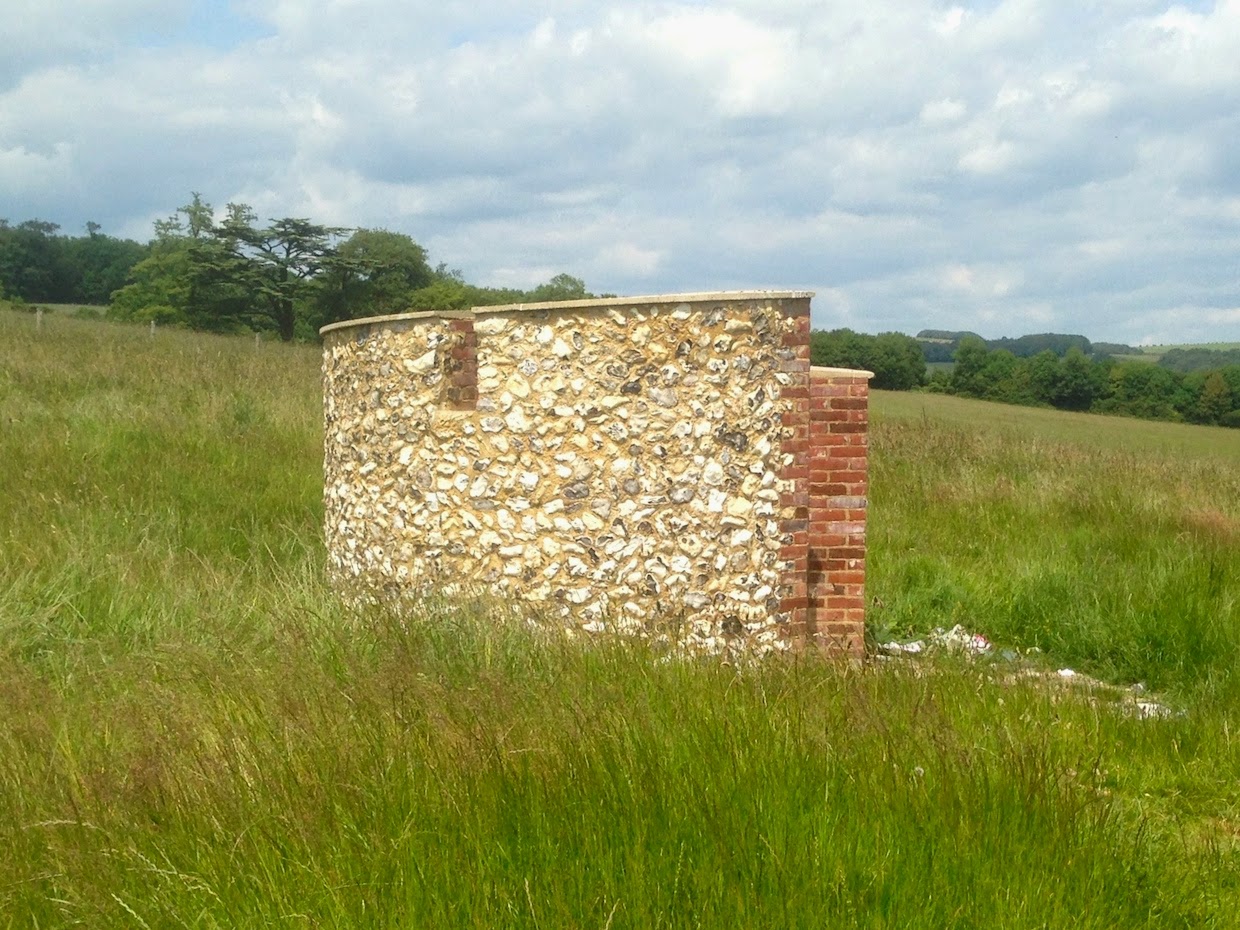 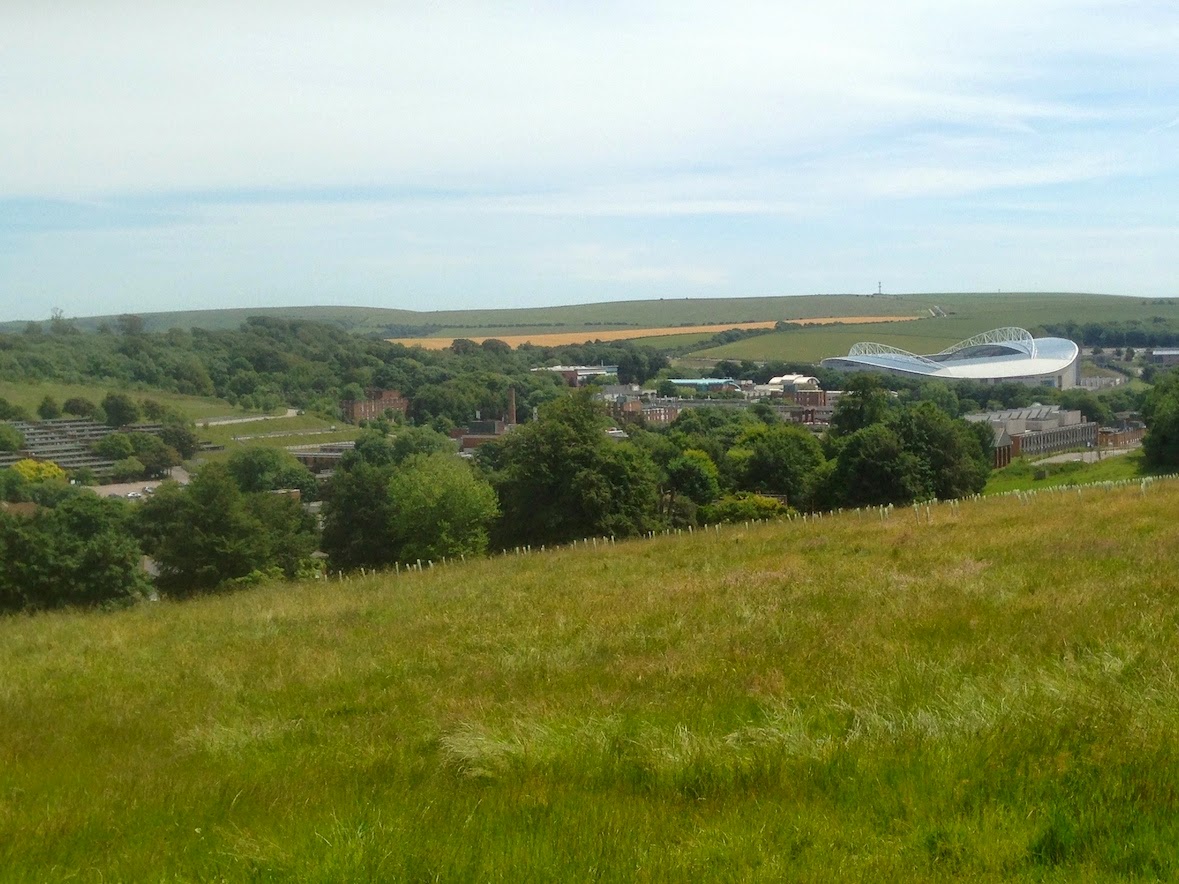 This little tower of flint and brick is situated on the Downs above the Sussex University campus and seems designed simply to mark a viewpoint over the valley to the Amex Stadium beyond.

The tower is without any kind of dedication but is bestrewn with the remains of barbecues, discarded wrappings and broken-glass. Perhaps a plaque to the  "Patron Saint of litter-louts" would be appropriate? 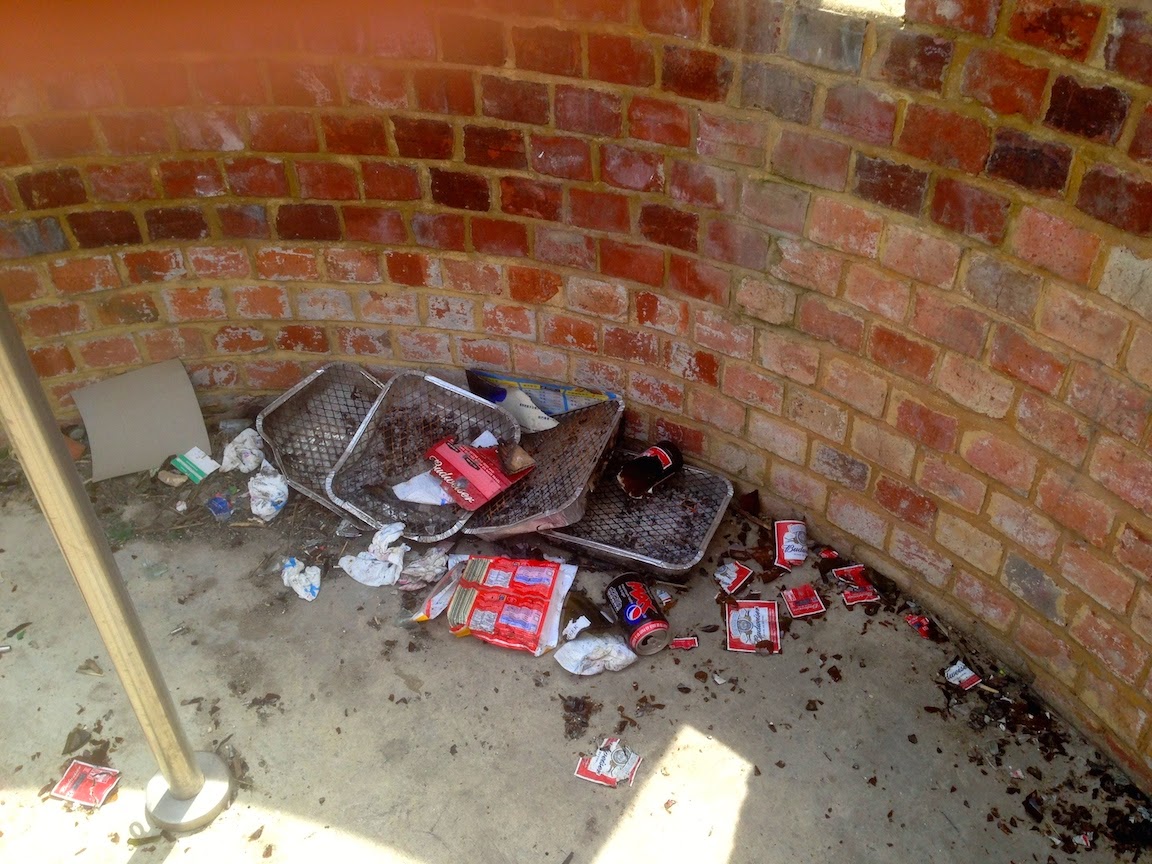 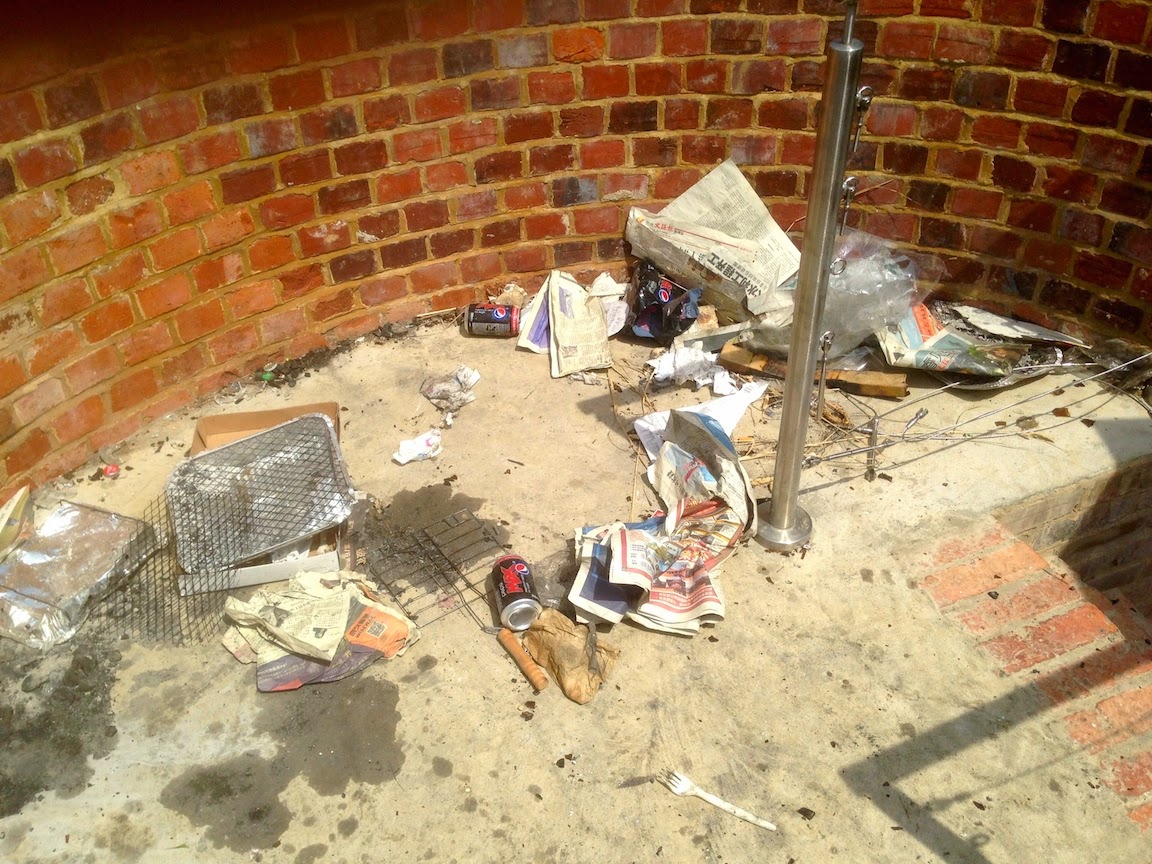 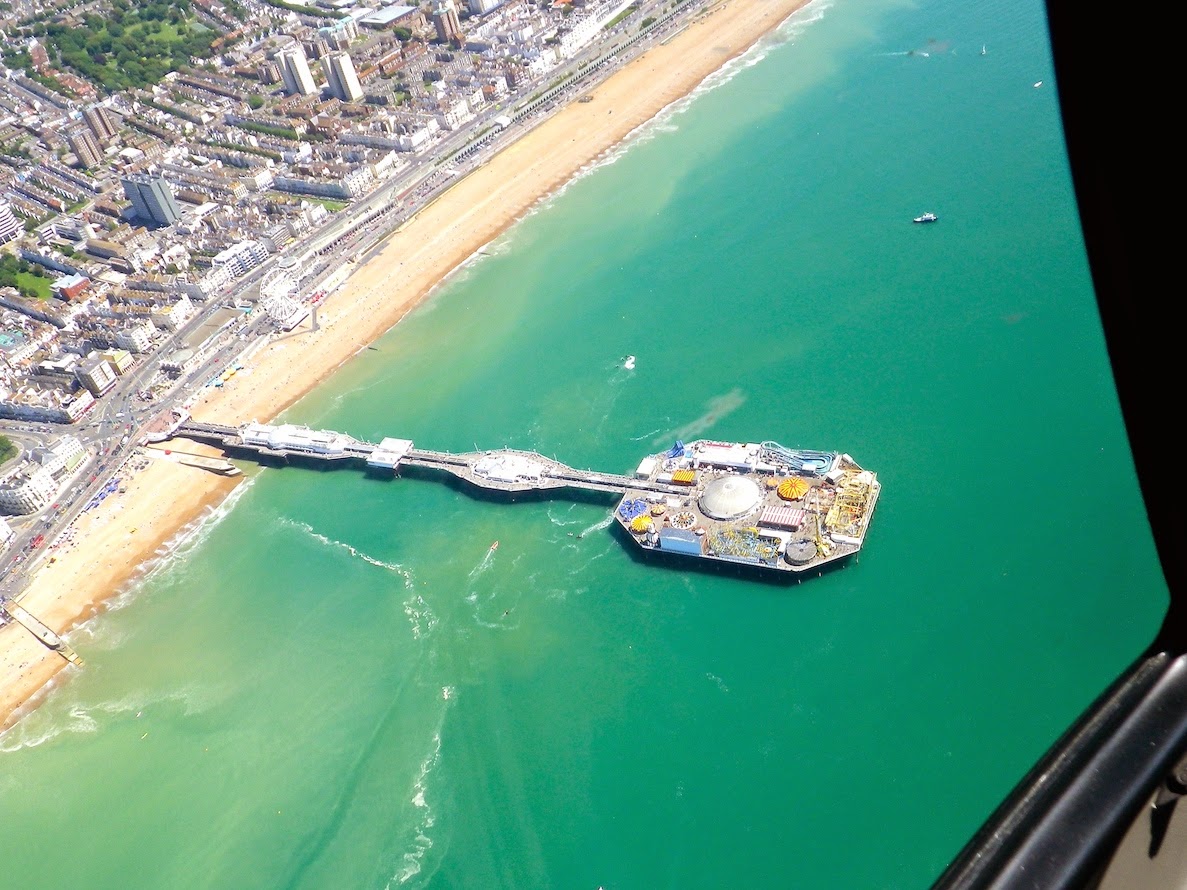 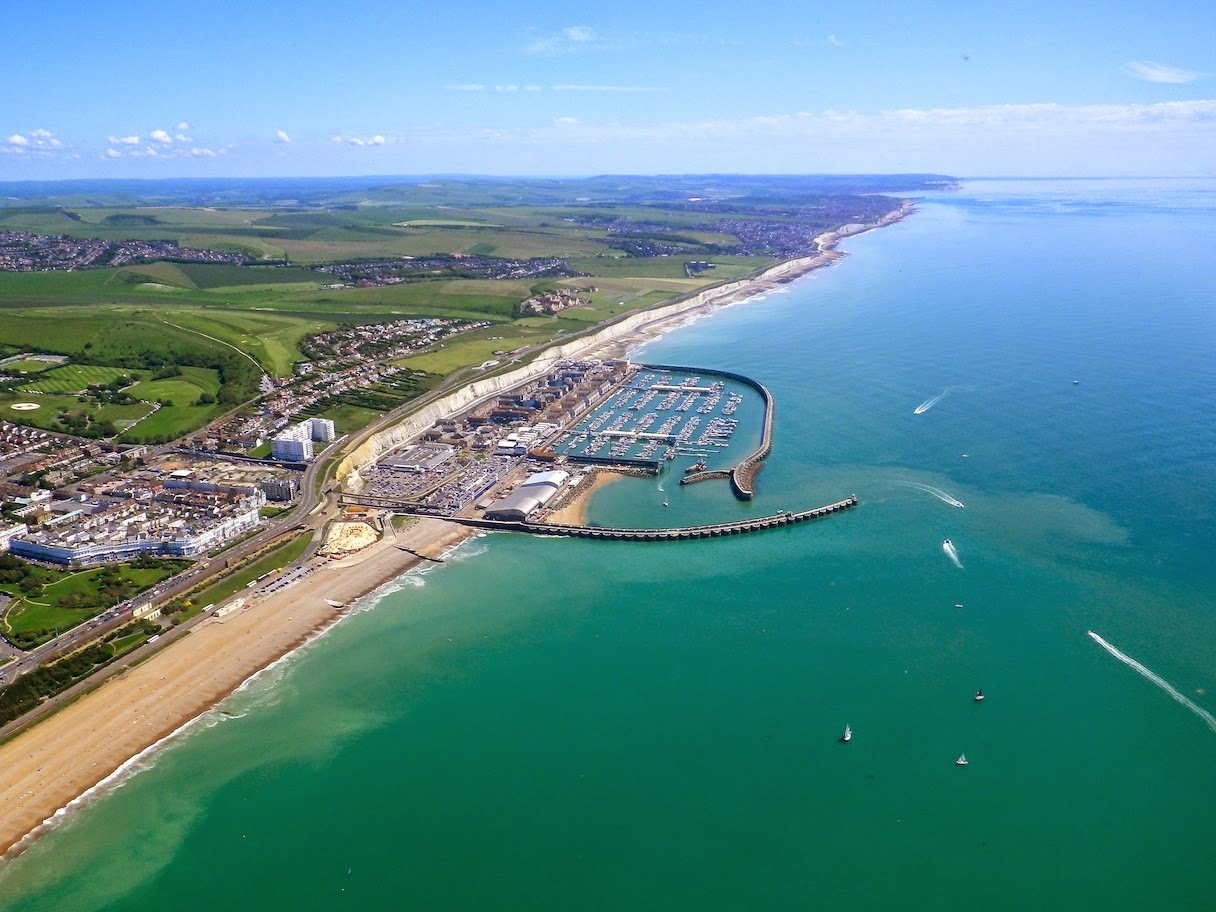 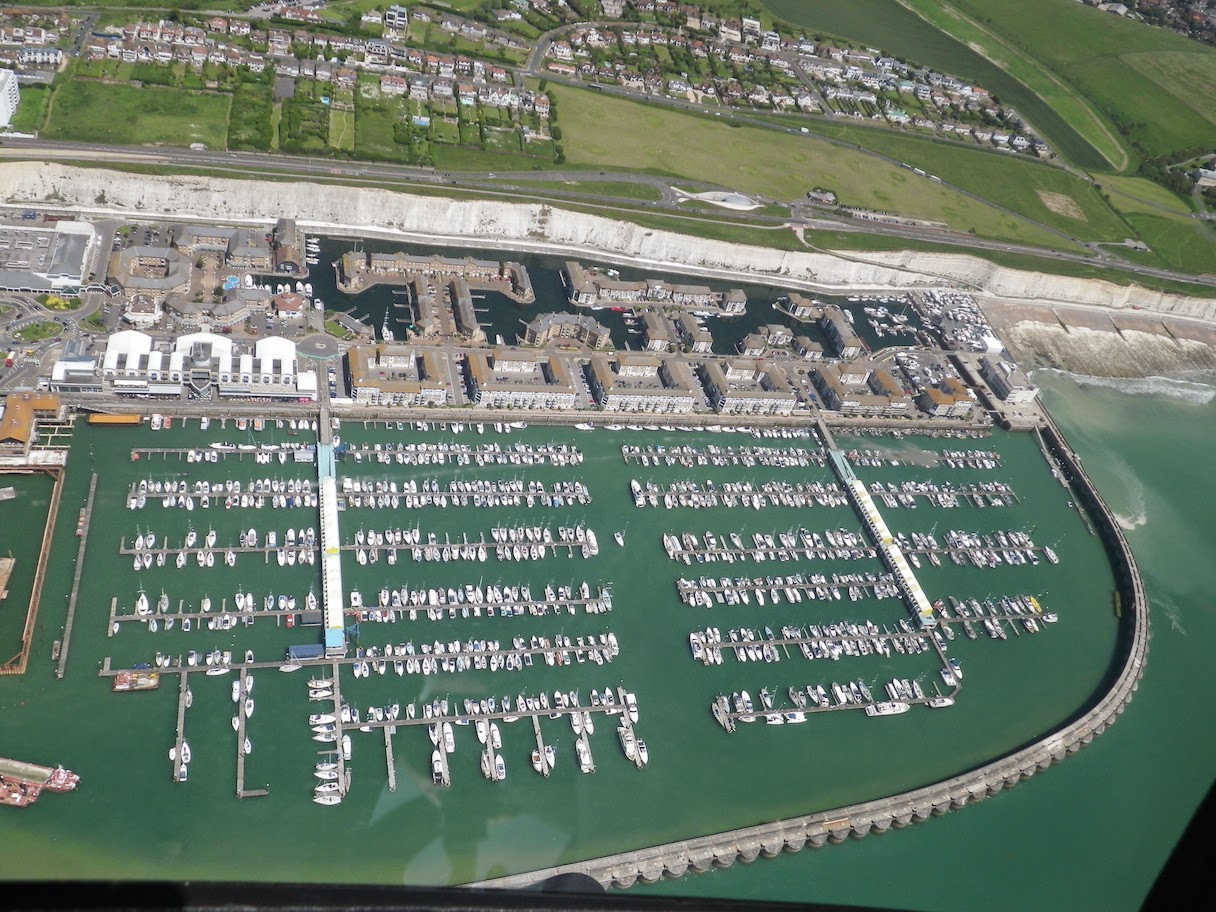 The new development utilises a modern take on the oriel window in a way that gives the occupants longer views while maximising privacy. Planning application BH2014/00922 proposes the demolition of some existing single-storey buildings and the construction of a two storey building on the site of the Council's Hove Park Gardeners' Depot. The Council thinks it can move the existing facilities to Stanmer Park nurseries. Presumably the consequential extra traffic at Stanmer and on the Lewes Road, and the extra mileage to City Centre gardens are judged not to be important considerations.

It seems that the building will not obtrude seriously on the landscape, especially in comparison with the lowering buildings of the City Business Park. What is of serious concern is the effect on traffic in the area. Such a specialised school must draw its pupils from over a wide area and the number of young children who will be living within walking distance will be negligible. How will pupils arrive and be collected from the school?  Will working parents voluntarily take and collect their children by bus, or will several hundred cars be descending on the quiet, narrow Droveway, or busy Nevill Road area twice a day? Even in Goldstone Crescent across the Park, parking spaces are not plentiful.

"SaveHOVE" has been campaigning against this proposal for some time. For their latest comment see "The Whistleblower, the EFA and the Spanish Bilingual Primary School".
at 18:43 2 comments:

This whimsical pairing, which so enlivens the streetscape, was created in the late Georgian period. In 1822, no.5, on the left, was occupied by A.N.Burkett, "Chemist to His Majesty", no.6, on the right, by a Miss Venner, "Dressmaker". This was the time when the Nash Royal Pavilion was reaching its final form, Prinny had just succeeded his father, and celebrity life in Brighton would no doubt have ensured good incomes for both these business. No. 5 later became a newsagent and circulation library.

It is good to see an old-established Brighton name "Gunn" still trading from no.6 and this seems almost to be reflected in the sensitive choice of light cream and what might be brunswick green for the external decor. Unfortunately the same cannot be said about no.5 which has suffered from some horrible paint jobs over the years. Even the present colour jars against the creams used on either side and the modern fascia is completely unsuitable for a listed building. One wonders why the Council do not exert more control over shop fronts, particularly on listed buildings, and require a more restrained, in-period style. This seems to happen in other cities with an architectural heritage and readily complied with by the owners.

The shallow 1st floor bay of no.5 is roofed with a metal semidome and the central window is separated from the side windows by pilasters in the form of bundled rods, or fasces. This is a feature of Empire-style furnishings of the period examples of which can be seen in the Pavilion.

No. 6 has a rather extraordinary mansard roof of slate the RH side of which is nearly vertical.
at 20:53 1 comment:

A Roof with a View

A selection of photos taken of, and from, the roof of the Royal Pavilion:- 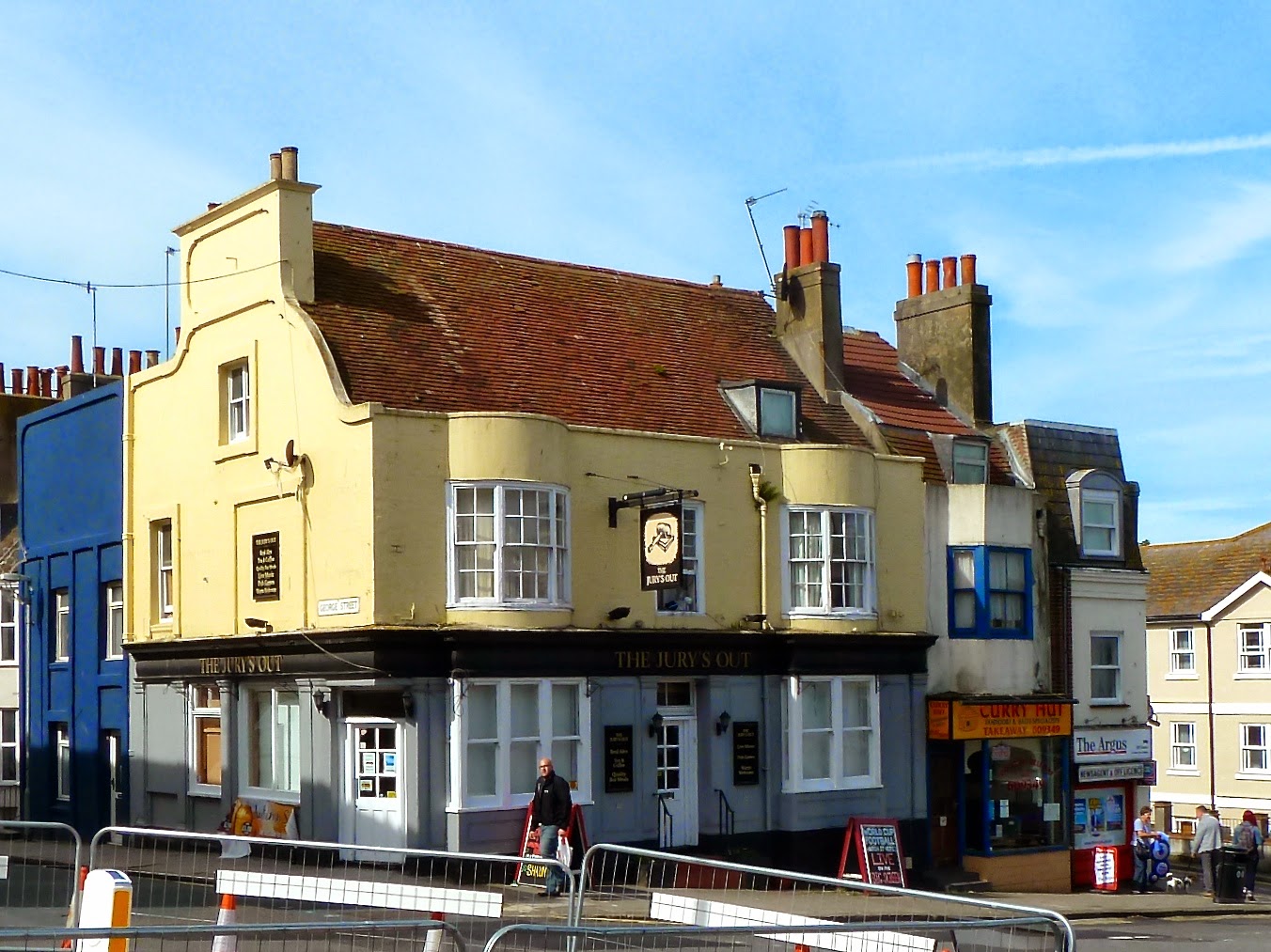 It seems likely that no.161, the only listed property in Edward Street, was originally named after the former Lord Chancellor Baron Thurlow. He was frequently to be seen at Brighton towards the end of his life. In the winter of 1805 in Brighton he was consulted by Sir Samuel Romilly about Lady Douglas's charges against the Princess of Wales. He died at Brighton in 1806.

The building itself dates from the early 19thC and had the ground floor converted to a pub at some date before 1832, the earliest mention in a street directory. It had thus carried the name 'Thurlow Arms" (sometimes supplemented with "inn" or "hotel") for over 140 years before its name was changed. Like many pubs in Brighton it fell victim to the modern fad for sweeping away all hints of a pub's history in an attempt to attract new custom. "The Jury's Out" was no doubt suggested by the building of the Law Courts across the road.

Among the features the EH description mentions are; the mathematical tiles in Flemish bond (which have been spoiled by being painted at some time); the Tuscan pilasters framing the windows and doors, and the continuous architraves to the windows and parapet. 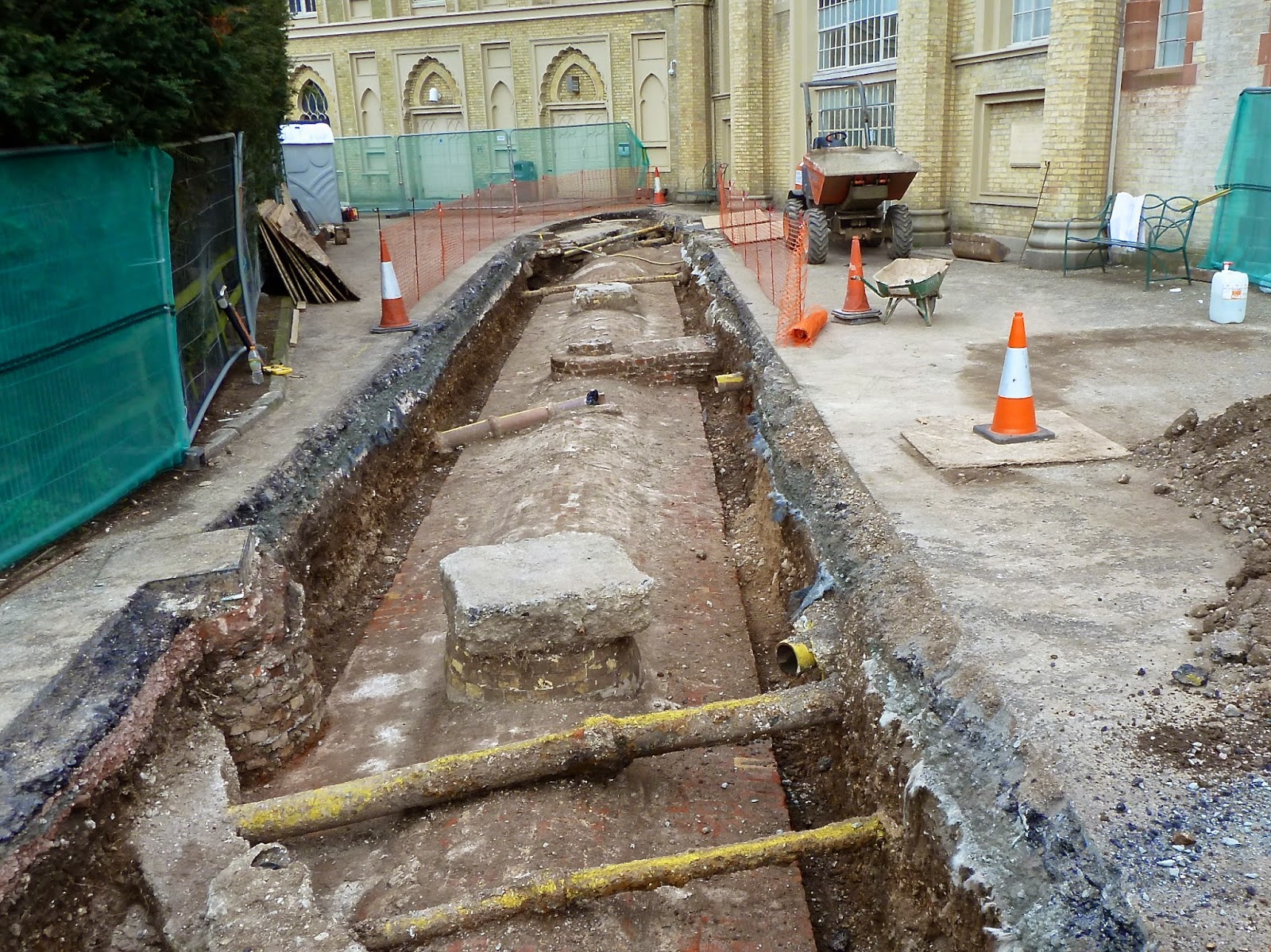 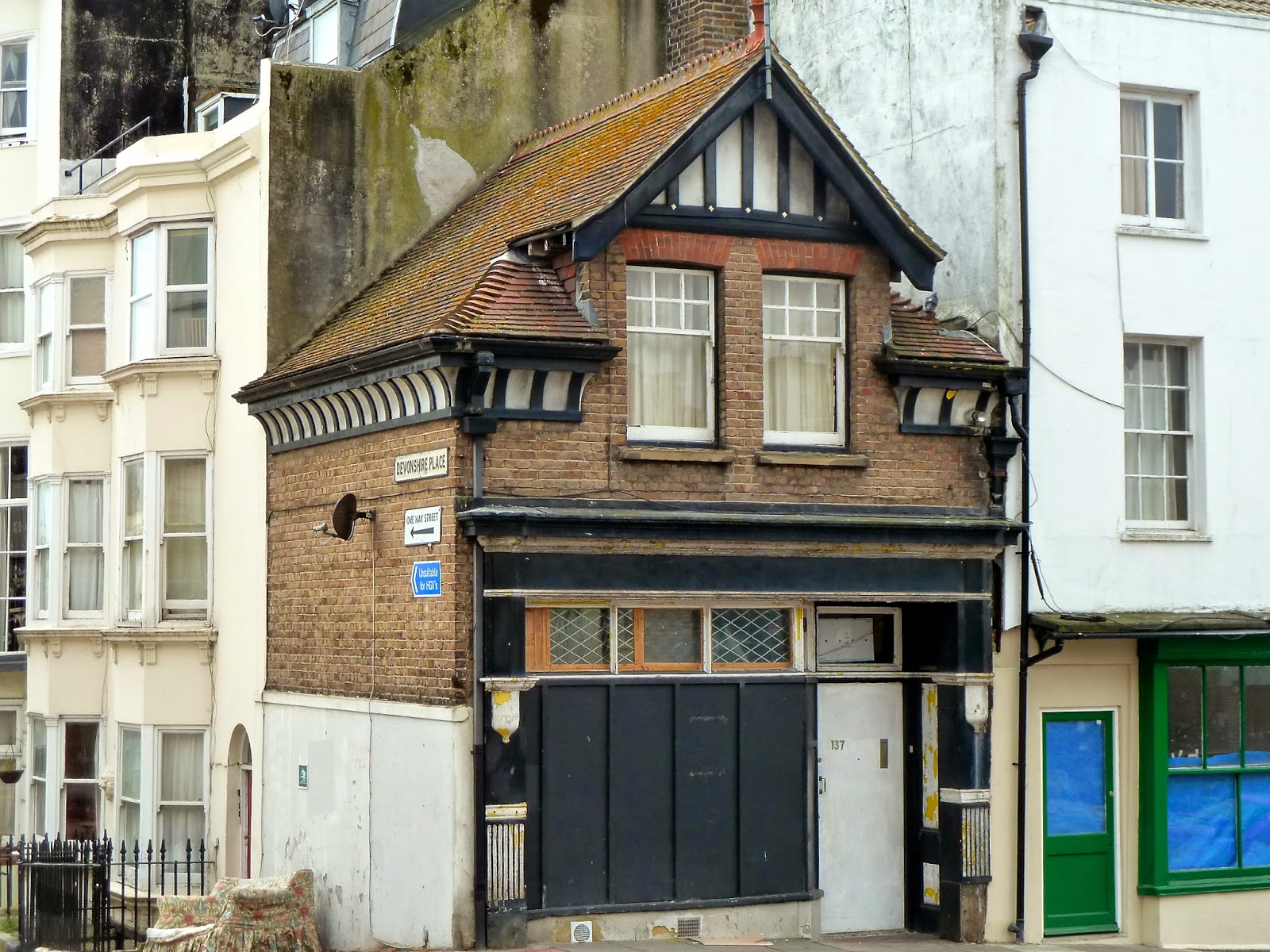 This little property on the corner of Devonshire Place never fails to catch my eye. It is sad to see it shuttered-up. It seems to date from 1893 which is consistent with the style. In that year the number 137 disappears from the street directory and the greengrocer J. Marchant who had been operating from the site had transferred to 138. By 1896 it had become a surgery. Later in the 20thC it became a tailor's.

Built into a corner with no outside area it is probably not ideal for living accommodation but it will be a relief to see it sensitively renovated and returned to full use. I wonder if it is too much to hope that the exposed wall of 26 Devonshire Place will be given a coat of paint at the same time? 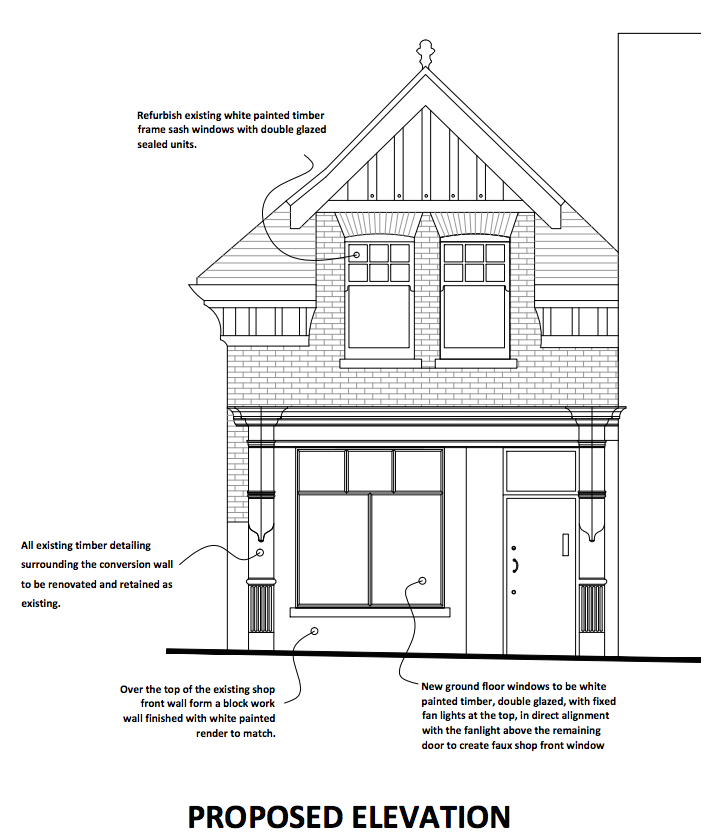 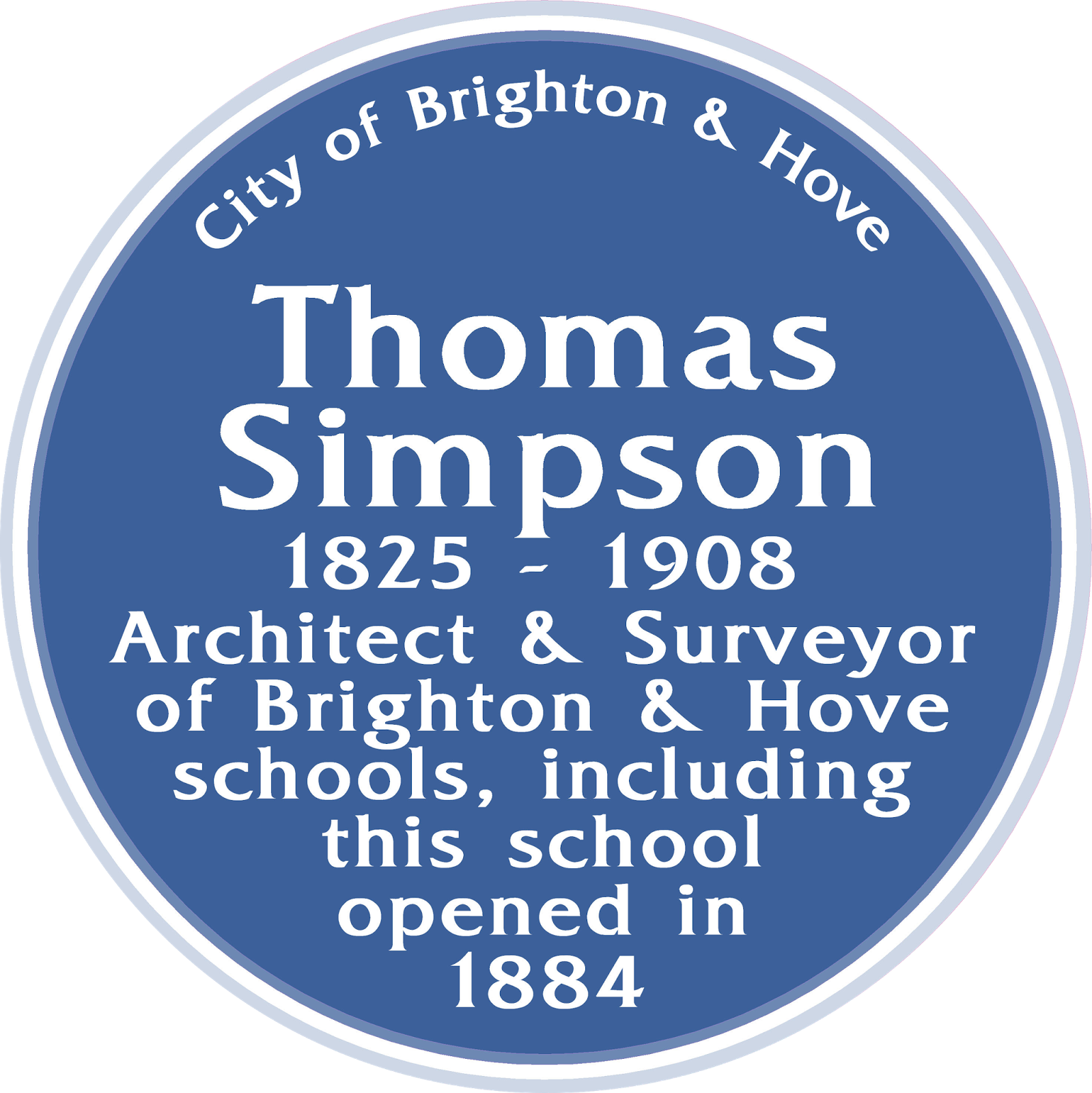 Thomas Simpson was a remarkable local architect whose work helped to transform education in Brighton & Hove in the 19th century and much of which continues to usefully adorn the City to this day. One outstanding example is the Connaught School in Hove which, as a result of a Brighton Society campaign culminating in 2009. was the last of the Simpson schools to be listed by English Heritage

On account of his outstanding portfolio of work the Brighton Society have long considered that Simpson deserves permanent recognition in the City, and have proposed to the City's Commemorative Plaque Panel that a commemorative plaque be sited on the western façade of the Connaught School.

The plaque as illustrated will be executed in high endurance glazed ceramic as approved by English Heritage and the cost will be about £1000, including installation.

Donations towards the cost are invited and will be warmly welcomed. They should be made payable to 'The Brighton Society' and sent to the Society's Treasurer: Lyn Lynch-White, 4 The Barn, Church Hill, Brighton, BN1 8YE.
at 17:33 No comments: