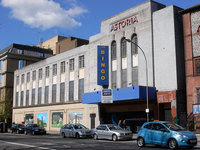 A new Facebook Group has been formed to campaign to save the old Art Deco Cinema in Gloucester Place.

"Too many of Brighton's Art Deco buildings have been demolished, and there are several under threat. The latest is the Astoria in the centre of town, on Gloucester Place. Opening in 1933 as a 1800-seat cinema, it became a Bingo hall in 1977 and closed in 1997. In 2000 November it was granted Grade II listed building status. It was bought by Stomp who had plans to turn it into a venue, then sold to Mike Holland, who also owns the Engineerium and Stanmer House. The Argus of 26 August 2010 reported that he is planning to demolish it and replace it with a six-storey 'business centre'. Plans will be presented to the local authority’s planning committee in October."
at 12:34