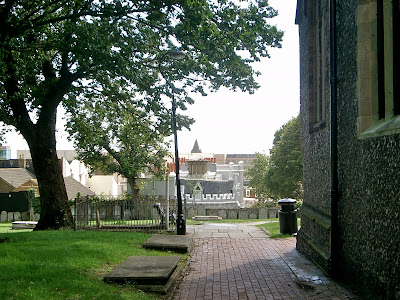 70 years ago St.Nicholas churchyard was  crammed with a century's worth of stone memorials of every shape and size, which must have made maintenance difficult, and certainly, during the war years, it became completely overgrown. At least it was enjoyed by the neighbourhood children for whom it became a jungle paradise  in which paths could be blazed and camps made.

Then in 1951 Brighton Council cleared most of the memorials away, stacking tombstones against the churchyard walls and retaining in position only those deemed of special local interest. This resulted in the garden space we enjoy now. The research into the tombs was, however, probably fairly cursory at the time.

There had also been an earlier clearance in the 1870's, so with the passage of time the details and stories of many of those interred at the site had been lost. In recent years work has been undertaken to rediscover information about those commemorated and the tales which accompany them. Gratifyingly the results of this work can now be followed in a new online gazetteer, The Brighton Mortiquarian.