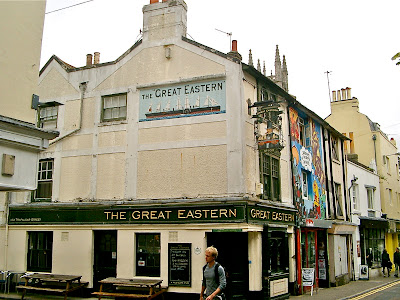 This fine old pub at the bottom of Trafalgar Street always seems to be popular but, as far as the outside is concerned, rather in need of some tlc. One fears it will go the way of so many of Brighton's old pubs and suffer "modernisation",  so losing a fine pub sign and all its historical associations.


Brunel's "Great Eastern" was launched in 1858, but ended her career on her maiden voyage, on 9th September 1859, due to an on-board explosion. At that time the pub was called "Maud of the Mill" but took the name "Great Eastern" and presumably its still-surviving appearance c.1862.

Although some of the buildings near the bottom of Trafalgar Street date from earlier in the 1800's, they will over the years have been subject to much alteration: whereas everything about the Great Eastern, although a few decades later, seems to suggest we are still seeing it as it was c.1862. It should surely be valued and protected for this alone.