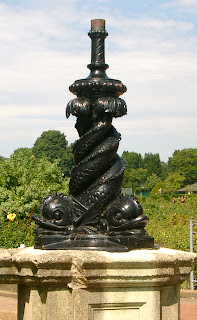 Brighton's cast-iron dolphin lamp standards are somewhat reminiscent of those to be seen along the Thames which were designed by George Vuillamy and are still in resplendent working order. Although Brighton's are smaller, they have three entwined dolphins compared with London's two, which face opposite ways along the Embankment. Brighton's are more designed to be viewed through 360 degrees and seem equally deserving of admiration as works of Victorian art. 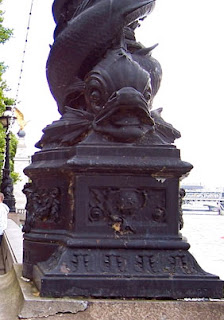 There comparisons end. In their decapitated state Brighton's standards look sad and neglected and have done for decades. It is probably too much to expect them ever to be restored to full working order, but surely the City could afford to fit them with some kind of finial, which would at least restore something of their aesthetic integrity. A simple globe, about 7" in diameter would be OK, certainly better than nothing; but to go one step better, Brighton is full of artistic talent both student and professional, could not the Council, or perhaps the Regency Society, sponsor a competition for a specially designed finial. 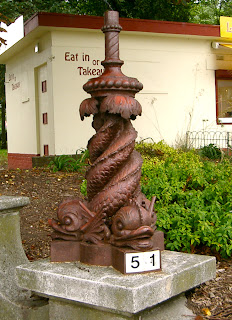 The photo above left is at Preston Park where there are six standards in all.
Above right is on the Embankment, London.
The photo to the left  is at the Level where there are two standards at the south end. I do not know the significance of the numbering.
at 17:13