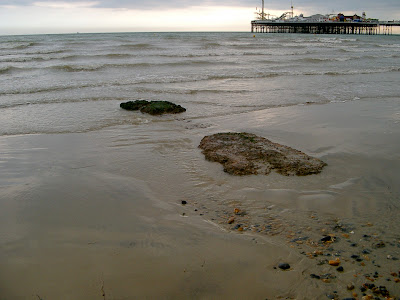 A photo taken on 11th August, at one of this year's extra low tides, shows rock-like objects but no wooden stumps. This can be compared with last year's photos which can be seen here. The absence of stumps may mean they have finally succumbed to the sea, or that the level of the mud has shifted, or that the tide is not low enough.

Early photographs of the Chain Pier at low tide show the second cluster of piles out from the shore surrounded by some kind of artificial platform. It seems likely that this was intended to protect the relatively soft piles, or the foundations, from scouring action by the sea and that what we can still see today is the remains of this platform. One can speculate that there may be quite extensive remains of the first set of piles (out of shot in the picture below) deeply buried in, and protected by, the shingle beach which has built up by about 15 feet over the past 100 years. 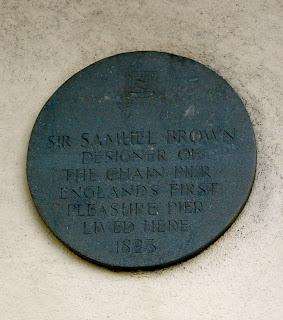 It is disappointing that the plaque on the Madeira Terraces which once recorded the position of the Chain Pier has now disappeared.  However the plaque to its designer and engineer, Sir Samuel Brown,  can still be seen on Chain Pier House in Marine Parade.
at 11:29