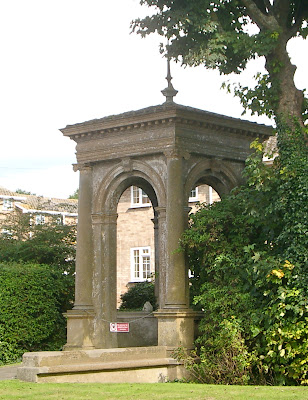 The Italianate villa temple is of rectangular elevation on a square base with Ionic columns and is variously described as once housing a statue of the Emperor Marcus Aurelius and that of a seated dog. Judging by the proportions of the temple, the Emperor seems more likely to have been the original occupant;  and this especially as Marcus Aurelius, a leading Stoic, wrote much about government of service and duty. This made him very popular in the Victorian era, and these subjects would have been particularly dear to Thomas Attree judging by his record of life-long civic service to Brighton.

Both statues have, of course, long since disappeared in common with others in Brighton. I feel a new theme coming on  . . .

The NEB, in its article on the Attree Villa,  seems to have confused the Garden Temple with the Royal (German) Spa at the south end of Queen's Park. On the other hand Timothy Carder in the original version had it right.