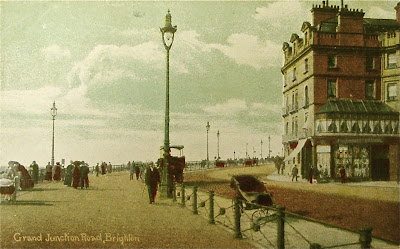 "Junction" refers to the joining up of the east end of King's Road with Marine Parade.  Up to 1829 these were only connected by a path running between the cliff edge and the seafront buildings. Due to erosion by the sea this became impassable to wheeled traffic and in 1829-30 Grand Junction Road was laid out on a newly-constructed seawall and extended seaward over a series of brick vaults. I have dated this postcard as pre-1893 because that is the year the large pavilion at the end of the West Pier was built and would have been visible had this view been later.
October 2010:- 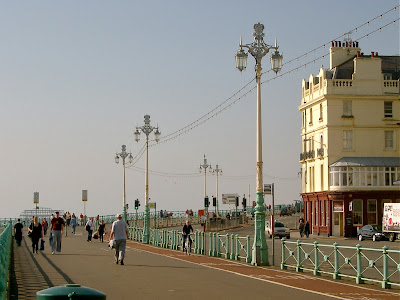 The modern photo shows surprisingly little change but the kerbside railings are in fact a relatively recent restoration to the original design. The electric twin lanterns dating from the 1930's, apparently on the original posts, are an ornamental improvement on the original gas.  Clarendon Mansions, built in 1870 by Charles Brill of Brill's Baths, has lost some of the embellishments to its dormer windows but the balconettes which were missing a few years ago have been restored. The remains of the West Pier pavilion/theatre is just visible in the distance.
Some information from "The Encylcopaedia of Brighton". Timothy Carder
at 19:44