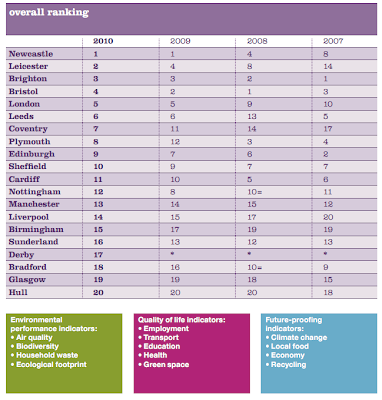 The annual Sustainable Cities Index, produced by Forum for the Future ranks Britain’s 20 largest cities according to social, economic and environmental performance. To do this it measures 13 indicators in three broad baskets:
Brighton from being top in 2007 is still hanging on in the top 3 notwithstanding that, on environmental performance, it has the worst ecological footprint of any city, as the chart below shows. 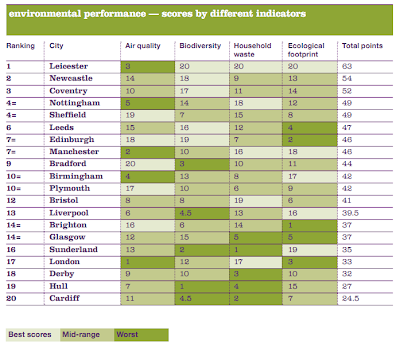 Ecological footprint is the impact of food and other consumer goods, housing, transport (including air travel), and private and public services on the environment (using 2006 data). The impact is measured by the amount of global land needed to sustain each resident of the local authority. The ecological footprint takes into account the impact of products produced in other areas or countries but consumed in the local authority while at the same time it excludes the impact of goods, services and energy manufactured or generated in the local authority and exported to other countries of the world.  Brighton has an Eco Footprint score of only 1, whereas Hull, bottom in the overall ranking has an eco score of 15. It seems therefore that Brighton is the victim of its own economic success and despite improvements in the energy efﬁciency of its housing, its high-consumption lifestyle is making a disproportionate demand on the global environment.

Biodiversity  is measured by the percentage of local nature sites that have undergone conservation management during the ﬁve-year period 2004/5 – 2009/10. It may be that this measure will already be improving as a result of the Council's efforts to return the Wild Park to original downland and the introduction of grazing to other areas of downland bordering the City.