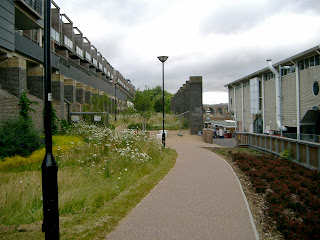 A conservation area, the Greenway, (see earlier post) which runs from the New England railway bridge to Brighton Station, is designed to be an “attractive green space” in the middle of the city, and was approved as part of the New England Quarter masterplan as a public right of way. However it has remained blocked off at the northern end while the Council and Network Rail have been negotiating the public access to  the Grade II listed bridge across New England Road.

A council spokesman said: “We’re still tying up the legal ends with Network Rail, finalising a licence whereby they grant the public access across their bridge and land.”

A spokesman for Network Rail said: ” We have been working with Brighton and Hove City Council and other parties in relation to the Northern Greenway scheme. We are satisfied all outstanding issues are being resolved and we are now in a position to move forward.”

From the the Prestonville Postblog, latest comment on: New England Greenway - Still going nowhere.
at 04:15