A view FROM the Chain Pier 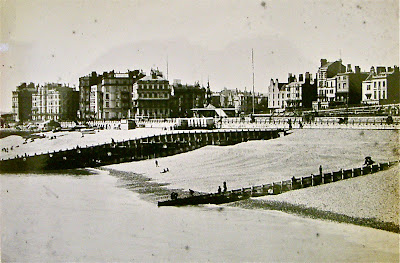 Images of the Chain Pier, paintings, drawings, photographs, are plentiful, but it is strange that few Victorian visitors seem to have taken photos from on the pier itself. This makes the above view, before the days of picture postcards, very rare,

Near the centre of the picture is the clock tower of the Aquarium entrance, built 1872, but, conveniently, no sign of the Aquarium Terraces which were completed just two years later. This enables the photo to be confidently dated to about 1873. Construction of the Palace Pier was still two decades away. The Chain Pier was closed to the public in October 1896 and then wrecked in a storm two months later.

Wooden groynes, such as those seen here, were first built in 1723 and added to throughout the 18th and early 19th centuries. They seem now to have all been supplanted by concrete groynes, the first being built in 1867 opposite the bottom of East Street.*

*The Encyclopaedia of Brighton. Timothy Carder
at 16:07