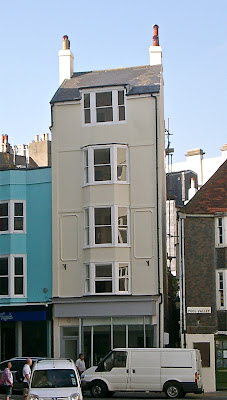 Fifty years ago the ground floor of 8 Pool Valley was occupied by a watchmaker of long-standing and the upper floors were residential. It became unoccupied in 1995 and then taken over by squatters with the inevitable rapid deterioration in its condition.  In 2004 the bay windows (never a strong point in early Victorian houses) became dangerous and had to be completely removed and at the same time the front of the property was boarded up to prevent further incursions.

This was the situation up to a relatively few months ago, but now, thanks to the efforts of the Council's Conservation and Empty Properties Departments it has been completely restored with the splendid result pictured here. For the full story see the Council's press release. It is reassuring to know that the Council is not entirely powerless in these cases of property neglect.

It is nice to see that the advertising panels one each side of the second bay and the associated lamp brackets have been retained. Perhaps one day soon they will be brought back into use, even if it turns out to be for yet another eating place.
at 15:30