Apart from a plot at the southern end the station site is now all built up and we have the depressing towers, windy canyons and unfriendly pavements everyone feared from the planning application. Yet the single, people-friendly feature that was promised, the Greenway, is still not fully open. This view below is taken through the barrier less than halfway along the path towards New England Road. 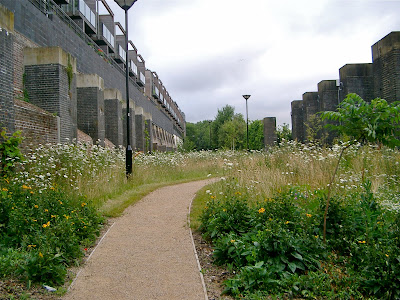 The Greenway, at present running between Stroudley Road and New England Street, is intended to be accessed via steps on the north side of New England Road which it then crosses on the disused goods bridge. It then follows the path of the old goods line to just below the Jury Inn.  It is good that the brick pillars which supported the line have been retained. The last part of the Greenway from Stroudley Avenue to the station is yet to be constructed.

A photograph of part of the site as it used to be may be viewed here.