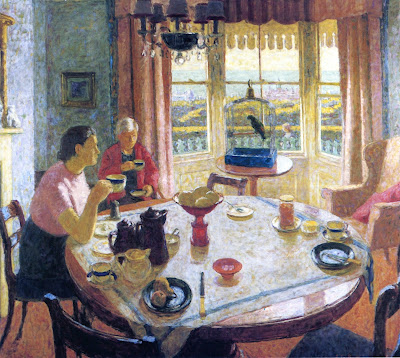 This large oil painting measuring 5 ft high was the undoubted hit of the 1995 'Brighton Revealed' exhibition where it dominated one wall of Brighton Art Gallery. It was painted c.1950 by Edward Le Bas and later became the part inspiration for a quirky book of the same name by Nigel Richardson.

Le Bas had travelled and painted a lot on the continent and, because of this, an imaginative art dealer originally named the painting 'Breakfast in Majorca'. In fact it shows a scene in the front room of a house in Clifton Terrace, Brighton, looking out over the private gardens towards the since decapitated Metropole Hotel and the sea.

The way Le Bas has captured the light flooding over the table is genius, although from the direction of the shadows it appears to have been a rather late breakfast. 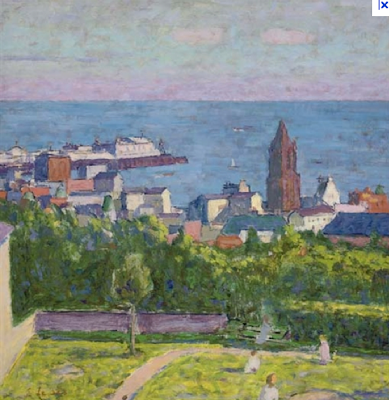 Another painting c.1952 by Le Bas entitled "Brighton from Clifton Terrace" appears to be from an upper room situated towards the Dyke Road, eastern end, of the terrace, as it shows the corner of the italianate villa, 43 Dyke Rd, then occupied by Clark's Secretarial College. A possible candidate for the viewpoint of this painting is 6 Clifton Terrace, a guest house at that time.

Both the above paintings are in private ownership.

Le Bas was born in 1904, educated at Harrow, Cambridge University and the Royal College of Art and started to exhibit at the Royal Academy from about 1930. He met Duncan Grant and the Bloomsbury Group in the 1940's and was elected to the London Group in 1942. By 1955 he had become a Royal Academician and in 1957 was awarded a CBE. By this time he had amassed an extensive collection of 20th century paintings which were the subject of a special exhibition at the RA in 1963. His relative early death in 1966 was attributed to heavy drinking.

The only Edward Le Bas in the Brighton Museum collections is the delightful "The Bedside Table", c.1940, which is currently on display in the Art Gallery. 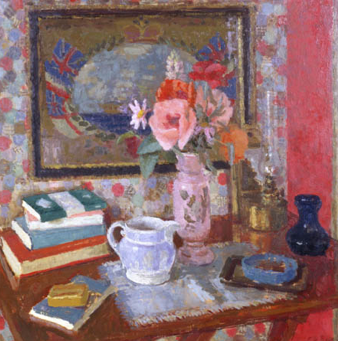