Council prayers in Brighton and Hove

"The new mayor of Brighton and Hove, Bill Randall, has announced that he intends to significantly increase the amount of religious participation before council meetings. As well as Christian Ministers, rabbis, Buddhists and Muslim imams will be invited to lead prayers in the council chamber.
Mr Randall says that this is all part of his 'multi-faith' year initiative forBrightonand Hove City Council.
Cllr Randall said the new multi-faith services would be legal because councillors would not be "formally summoned to attend" although they would take place in the council chamber. He said: "This is to better reflect the many faiths in our city and about promoting love and peace. During the year we will have one faith for every council meeting and the reaction to the idea has been terrific."
But one man who wasn't pleased about this was Bill McIlroy, former secretary of the NSS and editor of the Freethinker, from the Brighton and Hove Humanist Society, who said the decision to introduce multi-faith prayers into council meetings was "completely out of order".
He told the Brighton Argus: "Councils are elected to do civic business, not for part-time worshippers to turn public buildings into religious buildings. It's no good saying these prayers are fine because they are not on the agenda. They are just looking for loopholes because they know people will object. It's a total waste of time. Brighton is one of the most secular cities in the UK so I think they've got a nerve." 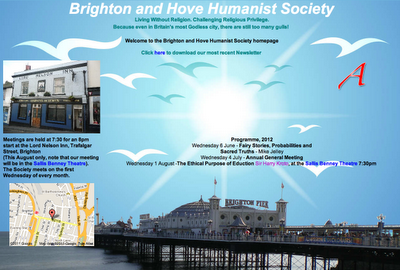