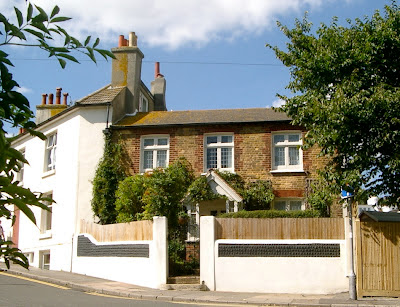 This  house, facing across Church Street, was built in 1821 for William Shelly, Sexton of St. Nicholas for 60 years and Parish Beadle.* It was originally known as 'Shelleys', later as 'Mount Zion House". The gabled porch was added c.1900. It is connected with the church by a now blocked-up tunnel. Originally a terraced property, it is semi-detached since the demolition of the north-west side of Mount Zion Place in the 1960's. This was a terrace of quaint, but neglected, early 19th century cottages. They  had long front gardens and today would have had estate agents exhausting their powers of encomium. 'Shelleys' was grade II listed in 1989 but the unusual front wall is unfortunately not included.
*Timothy Carder, EOB 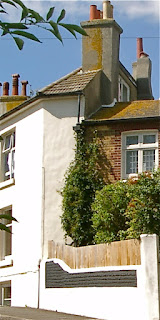 The house meets 48 Church Street, next door, in a strange configuration. 'Shelleys' was presumably built before 48, but it is difficult to imagine the process whereby it acquired a small triangle of garden to the inconvenience of the builder of 48. The latter was thereby obliged to execute a complicated oblique change of direction for the sake of a few extra square feet of floor area.