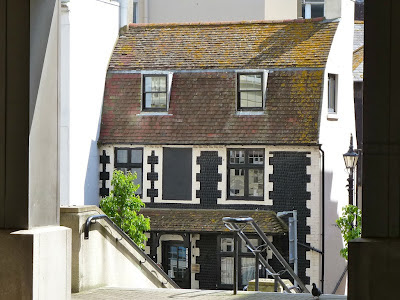 "The Cottage" Little East Street, was built in the late 1700's and the two ground floor bay windows and lean-to roof were added c.1900. The obscured bay to the left of the door is triangular. The front wall is of pitch-painted flint cobbles with painted brick quoins. It was grade II listed in 1971. The period lampost to the left is at the entrance to the twitten made famous by the film  'Quadrophenia'. It adds a pleasing visual punctuation to the scene.

The viewpoint of the  photo from the from the top of the Bartholomew steps avoids converging verticals.
at 14:44