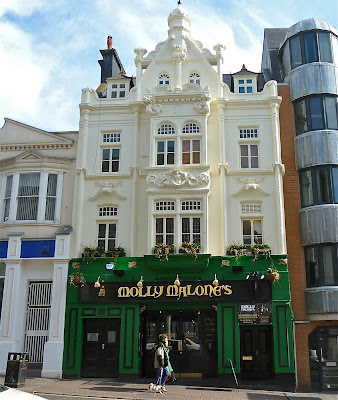 Foremerly known as "The Heist" and ill-advisedly painted black, no.57 has been given a handsome makeover as "Molly Malone's". It must have taken many coats of paint, which can have done nothing to enhance the detailing of the seriously damaged reliefs. For the record they depicts mermaids, a Brighton dolphin, scallop shells, fruit and mythical birds, possibly griffins.

In the early 19th.C the Carpenter's Arms public house, later the Compasses, stood on this site. It was rebuilt for Edlins as Christie's Hotel in about 1901. The Brighton Pevsner descibes it as being in the Free Renaissance Late Victorian style and compares it to the work of London architects Treadwell & Martin, 1890-1910.

It became "The Bosun" in the 1970s, the "Nellie Peck" in 1986 and "The Heist" about 10 years ago; each change requiring a repaint, the consequent erection of scaffolding and increased chance of accidental damage.

No.57 lies within the Old Town conservation area. At one time it may have been grade III listed. This was a non-statutory designation abolished in 1970. Properties in Brighton with this listing were then transferred to the council's own "local list". This list is not published, although no. 57 may still be on it.