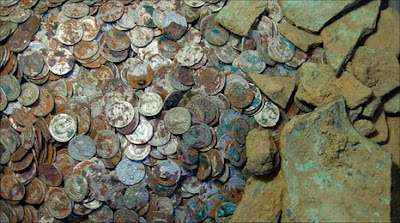 The Royal Pavilion & Museums can celebrate another success reflecting its growing importance as a regional museum. With the aid of a grant from the Heritage Lottery Fund  it has acquired the hoard of Roman coins, and the pot that held it, discovered in the High Weald in 2006 by Tim Symonds from Burwash.

The 2895 siver coins valued at about £40,000 dates from the 3rd century AD, when the Roman Empire was becoming increasingly fractured & troubled. The value of the hoard then represented someone's life savings. Two are of special significance; the third coin of Tranquillina (wife of Gordian III) and only the second coin of Cornelia Supera (wife of Aemilian) found anywhere in the country.

Roger Bland, Keeper of the Department of Portable Antiquities & Treasure at the British Museum said: It is the largest hoard of coins of the reigns of Gordian III (238-44), Philip I (244-9), Trajan Decius (249-51) and Trebonianus Gallus (251-3) to have been found in Britain since the Dorchester hoard of 1936 and the coins provide important evidence about this troubled period of Roman history, while the hoard is also an important historical document about Roman Sussex.’

The hoard will go on display in Brighton Museum in the Summer. Plans for a touring display in early 2013 will take the hoard to other local museums including Hastings Museum, Bexhill Museum, Battle Museum, Eastbourne Museum and Fishbourne Roman Villa. 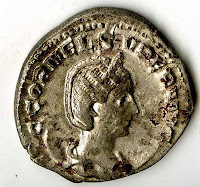 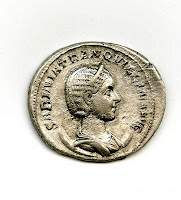