View of the Level 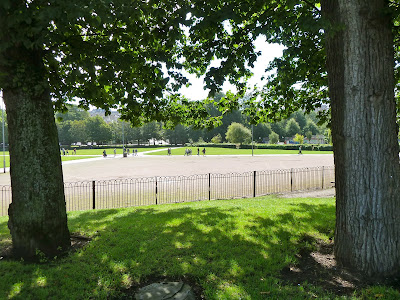 Looking south-east from the north-west corner shows the view which will be most affected by the proposed relocation of the skate-park. It will occupy the green triangular area in the middle distance but is intended to be at least partly sunken and screened either by grassy mounds or shrubs. A much greater loss of scenic amenity is surely caused by the much larger, sterile, 'gravelled' area in the foreground. It is surprising there was no opposing petition organised (as far as I can remember) when this was installed. As part of the proposed restoration project this gravelled area will be returned to grass leading to a significant net gain in the total area under grass.

As an older member of the community I would prefer that the skate-park was not located here at all, but recognise that the needs of the young must be catered for today just as we expected for our children & grandchildren.  Skating in its various spectacular forms is the choice of modern youth; a skate-park has been long established in the Level, and we must accept it. The compensations for accepting its relocation are in fact by no means negligible as it will allow for the creation of pleasanter, more spacious gardens in the southern section.

The Council is surely duty bound, by normal democratic standards, to either ignore the petitioners, or to find reasons for declaring its public consultation invalid, and then re-running it.