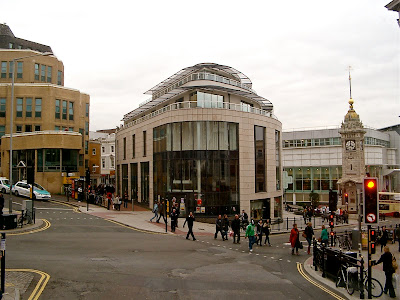 The original designs for the North Street Quadrant redevelopment in 2003 showed a cladding of several light-blue horizontal strips separated with white panels, a kind of modernist-whimsy. It might have harmonised vaguely with the Boots building, but as far as I know, that itself is not held in great esteem. It would certainly have 'fought' with the victorian Clock Tower and the yellow brick of Queen Square House.

The £4M redevelopment involved the demolition of all properties of North Street Quadrant apart from the listed Quadrant Public House on the north-east corner, and the excavation of an 8 metre deep basement. The final result is not unattractive. At one stage it reached 90% occupancy but Asda's 'George' vacated the landmark apex section in 2008 and it has not been occupied since, nor apparently on the market. This is puzzling. Stocked with clothing it certainly seemed somewhat cramped and uncomfortable; but it is such a conspicuous, busy spot one would imagine a profitable use would not be difficult to find, even in the present climate. Even another coffee shop would be better than nothing!