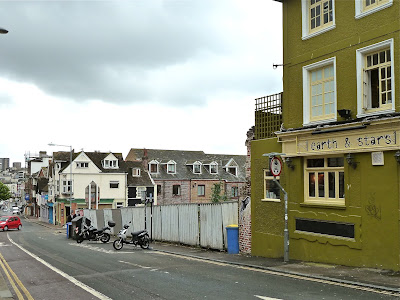 This site, below the Earth & Stars pub on Church St. and stretching along Portland St., must be the only remaining vacant plot in the City centre. It has been like this for at least 18 years, and during that period, through times of both boom and bust, the developers have had numerous attempts at producing a viable scheme.

A planning application for demolition of existing buildings and construction of a four storey building was approved in 1993 and some foundation work was started in 94.  Over the following years several amendments to the original plans were submitted and withdrawn until in 2006 plans for a seven floor development were rejected by the council. In 2007 plans for  six floors  were also rejected and an appeal was refused.

The latest application BH2011/02401 by local architects Morgan Carn is for a development on four floors comprising two retail units and three floors of office space on Church Street, a terrace of six 3 bedroom houses on Portland Street, and a terrace of three 2 bedroom houses in the southwest corner of the site which will not have road frontage. The buildings form a U-shape around a central landscaped courtyard with parking for 25 cars in a basement level. The parking will be accessed via the existing private gated car-park on Portland Street.

Part of the west side of Portland Street was rebuilt in the 20th.C with terraced cottages in traditional style. The style of the proposed new terrace is modern-vernacular so, although harmonising materials and finishes are specified, the contrast with the rest of the street will be quite striking.