"The Court of Death" 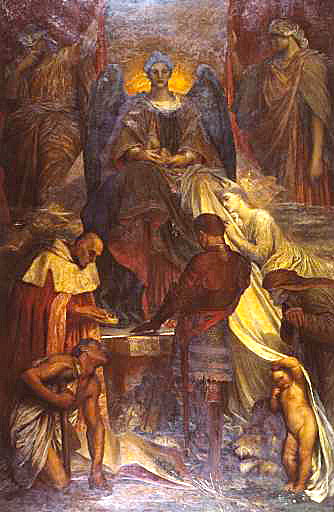 This painting by the victorian symbolist G F Watts took him over 30 years to complete, and because, at 14 foot high, it was too large for his studio at Compton, Surrey he rented larger premises in Brighton. Over the period 1870 to completion of the painting in 1902 he must therefore have been a frequent visitor. He also employed the services of famous Brighton photographer Thomas Donovan who had a studio in St. James's Street..

The painting is to be seen in Tate Britain. The display caption reads:-
"This painting was intended for the chapel of a paupers’ cemetery. Death is shown as an enthroned angel, holding a baby which shows, according to Watts, that ‘even the germ of life is in the lap of Death’. Flanking Death are allegorical figures of Silence and Mystery, guarding what lies beyond the veil: sunrise and the star of hope.

In the foreground a warrior surrenders his sword and a duke his coronet, showing that worldly status offers no protection. But Death also offers refuge: a man with crutches finds relief from pain, while a pale, sick woman rests her head."