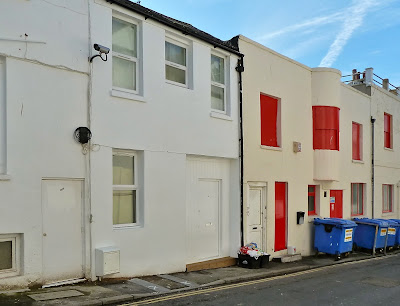 Up to about 50 years ago this recessed doorway in Little Preston Street was the entrance to a passageway to 34 Preston Street under the first floors. These streets, running north-south, built back-to-back in the 1820s, are lengthy. The passage would have provided a useful shortcut for anyone wanting to pass west to east; labourers or artisans perhaps, seeking to service the large houses in Regency Square, who otherwise would have had a long diversion up to Western Road or down to Kings Road.  One wonders whose was the original initiative to provide such a facility? Perhaps the occupier had it created in connection with his own occupation or maybe it was just the altruistic whim of the builder.

The Preston St. entrance was situated under the "Eat In or Take Away" sign of China China which occupies numbers 33 to 35 Preston Street. The passage was probably never gated, and a public right-of-way must have been long-established. That notwithstanding, someone in the 1960's thought it worthwhile to terminate the right-of-way by whatever arcane legal instrument was necessary, and the space was incorporated into the ground floors. 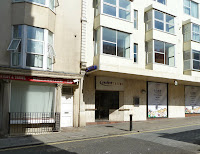 There was  another passage in Preston Street next to no.5, illustrated left, for many years a chemist, but this was very near the seafront and consequently less used. This passage disappeared in the same period, when the modern building on the right was developed.
Similar passages in the City run between Gloucester Road & Gloucester Street, and between Western Road Hove & Farman Street. The latter is scheduled to be gated to reduce unsocial behaviour at night (see Council press release). There are others: and they continue to be designed into some modern "mews-type" developments.

If footpaths running "twixt and "tween" properties are called twittens, these types of passage ways should perhaps be termed "twunders".
at 19:18