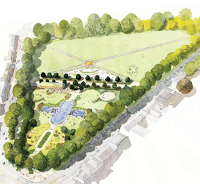 Adrian Morris, one-time local Labour candidate for St. Peters & North Laine, has presented a 3000 signature petition to the Council against the proposals to move the skate park to the northern section of the Level. (Brighton Society report). As a result of this, opposition councillors have united to ensure the decision was sent back to environment cabinet member Cllr Pete West for reconsideration. One hopes this is a mere formality. What force can, or should, a one-sided petition have in the face of a long, thorough public consultation exercise which showed that 55% of people were in favour of moving the skate park. The issue is a finely balanced one. The only way this petition might have been given any legitimacy is if, for the purposes of comparison, a counter-petition had been launched for moving the skate park; and the results had been presented at the same time.

Previous post.
Council approves Option 2 for the Level.
at 15:06