The Royal Pavilion Gardens: then & now 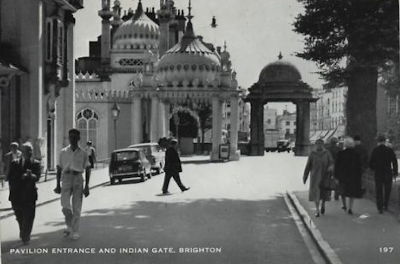 Judged by the parked mini and the clothing, this postcard looks to date from the early 1960s but the scene was basically unchanged until the start of the major landscaping scheme 25+ years later.
In 1803 Prinny had caused New Road to the west to be created to divert the 'hoi polloi' away from Great East Street that then ran past his front door. He later commissioned John Nash to draw up a design for the garden. Due to Prinny's dire financial situation this design was never fully implemented, and when the Pavilion passed to municipal control the gardens were altered beyond recognition. Starting in 1985 however, with the aid of a Heritage Lottery grant, the whole of the west garden was landscaped according to Nash's plans.  As much as possible all the plants used were those that would have been fashionable and available in Regency England, or modern strains chosen to better endure the seaside climate.
Earlier posts:-