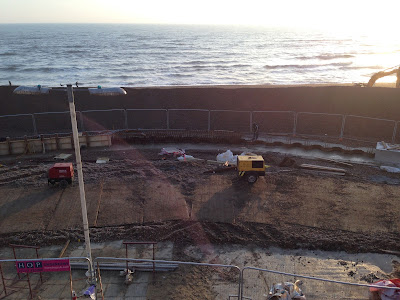 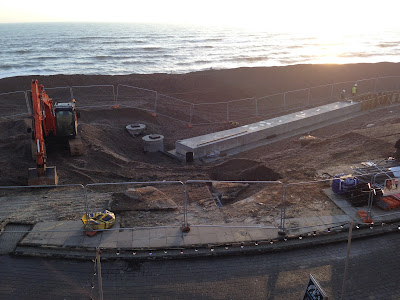 The photos show work underway to reconfigure the lower promenade around the Shelter Hall and provide foundations for the construction of a new seawall. This phase is expected to be completed by the end of March, weather permitting.

The Shelter Hall extends under the A259, one of the major routes in and out of the city. From 4 January,  a 50 metre section of  King's Road either side of West Street will be closed to allow for work to take place under the A259. The junction will include a dedicated filter for right turns into West Street for westbound traffic. Access to Churchill Square and car parks will be kept open.

Traffic travelling southbound down West Street and heading west on the seafront will need to turn right on Russell Road and use the Cannon Place/A259 junction.
Shared pedestrian and cycle access along the upper prom will be maintained at all times, as will access to the lower prom.

The total £10 million project involves rebuilding the historic Shelter Hall (a Victorian building originally designed to shield bathers from bad weather and hot sun) to become a flagship commercial location for the 21st century, creating a new walkway on the beach, enlarging the upper prom area and building new public toilets on the seafront.