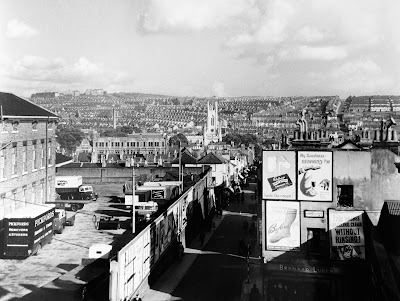 Looking east from the station forecourt is a great view that is denied to most people. This 1960s photographer must have been very tall or standing on a box.
On the left is the British Rail Goods Depot. This was built out on a platform to be level with the incoming goods line below the main station. The goods line is now submerged by the New England Development although the Greenway follows its route for a short section south of New England Road.

On the other side of Trafalgar Street is Bernard Luper, tailors, and a small corner of the Unique Garage, now 'Thrifty', a car rental business.

In the distance, beyond St. Peter's Church is the massed mid-19thC housing, built largely for railway workers; now known as Hanover and much sought after. 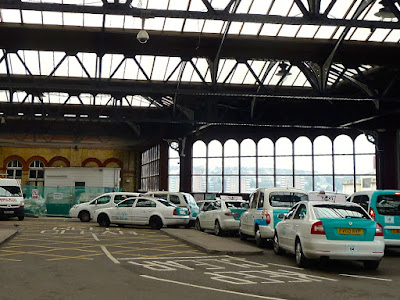 Three or four years ago, as part of the Station Gateway project the Council were considering  improvements to the canopy. They proposed discussions  with English Heritage and the Railway Heritage Trust to agree on what could be done to the listed structure to improve the passenger experience. One idea floated was to open up the view over Brighton on the eastern side by revamping the glazing and creating a resting area with seating. At that time it was intended to move the taxi queue elsewhere. Maybe if the taxis are moved to Terminus Road, as has recently been proposed,  the idea can have a new lease of life.