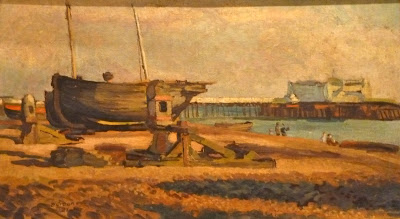 Duncan Grant, 1885 - 1987, painted "Brighton Pier & boats" in 1938. It seems to be his only work with a Brighton subject, notwithstanding that he lived not too far away at Charleston, East Sussex. The painting  is interesting in that it shows two of the old wooden windlasses which adorned the beach and were still in occasional use, until the mid 20th century. They were gradually supplanted by manual iron winches. Eventually a powered winch under a green painted steel cover was supplied by the Council and the wooden windlasses disappeared. The large wooden hog boats, such as the one shown in the background, fitted with inboard motors, remained in use somewhat longer, fishing in the winter and providing tourist trips in the summer.


The painting is believed to have been originally in the collection of Edward Le Bas who bequeathed it to Eardley Knolleys owner of the Storran Gallery, London. From Eardley it would have passed to the picture framer and lover of EM Forster, Mattei Radev and thus become part of the important Radev Collection.
at 20:00