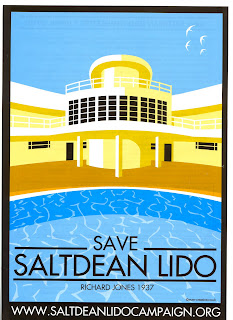 Earthshaking news is reported today that the Saltdean Lido and its art-deco buildings have been placed on English Heritage’s Heritage 'At Risk Register' for 2011.

The only Grade II* lido in England, Saltdean Lido appears on the listing for the first time after years of neglect have led to parts of the building becoming derelict. Only 10 buildings have been added from across the South East to the 'At Risk Register' and Saltdean Lido is the only building owned by a local authority to appear this year. The freehold of the Saltdean lido site is owned by Brighton and Hove Council and it is highly unusual for council-owned sites to appear on the Register.

This news has come extremely opportunely, as tomorrow, the Saltdean Lido Campaign will present an e-petition to the full Brighton and Hove Council meeting. This petition calls upon the Council to take action to recover the lease. It is the petition with most signatures in the Council’s history.

Modernist style buildings of this period can pose particular difficulties of maintenance and restoration due to the construction techniques employed and it is entirely inappropriate that such an iconic, architecturally important building should be at the mercy of a long leaseholder whose prime motivations lie in developing the site for profit. Despite being repeatedly told by Brighton & Hove Council that residential development will never be allowed on the site, the leaseholder continues to talk publicly about his ambitions, recently telling the BBC that he intends to restore the building 'in the future', but only when residential development has been approved. Rebecca Crook, chair of the Saltdean Lido Campaign, said: “It is clear to all that the leaseholder has deliberately run-down this building so he can say that the only option is development.  It is equally clear that Brighton and Hove Council is at fault for letting this happen and needs to start legal proceedings immediately to regain the lease”.

Some examples of the decay & neglect already present are illustrated below:-


English Heritage states in its Heritage at Risk Register that local authorities have a primary role in protecting the historic environment and tackling the issue of neglected buildings.  It says that local authorities can take action to secure the preservation of historic buildings through the use of statutory notices.  To help local authorities make more frequent and timely use of their statutory powers, English Heritage runs a grant scheme to underwrite a significant proportion of the irrecoverable costs involved in serving Urgent Works and Repairs Notices.

The Save Saltdean Lido campaign has ambitious plans for the site and high-profile supporters include English Heritage and the 20th Century Society. Conran & Partners, Sir Terence Conran’s architecture and design practice, has backed the Campaign by drawing up viable alternative plans for the entire site with no residential element.

The Campaign has developed a business plan – described as ‘robust’ by an independent consultant which lays out how the site could be financially self-sufficient if operated by a Community Interest Company (not-for-profit organisation) which means that all the profits would go back into the building.

More details about the Campaign can be found at www.saltdeanlidocampaign.org
The Council meeting at which the petition will be presented starts at 4.30 pm on 20th October.