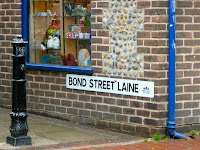 There is now an epetition available on the City Council website. It reads:-

"We the undersigned petition the council to revisit the 1981 decision of the Highways and Transport Committee from which this misapplication of "laine" originated and rectify the situation without delay. The use of "laine" in this nameplate is incorrect and misleading."

"The word "laine" is of anglo-saxon origin meaning "loan" or "lease" and was the Sussex dialect term for the open arable fields of the feudal system of agriculture. Its use has survived uniquely in Brighton to the present day and its correct application should be jealously guarded as part of Brighton's history and unique character."

This petition will be presented to Environment, Transport & Sustainability Cabinet Members Meeting on 24 January 2012.

The petition can be signed at: http://present.brighton-hove.gov.uk/mgEPetitionDisplay.aspx?ID=261