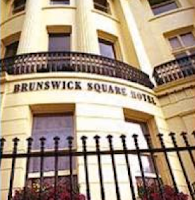 Two lesbians who were denied a double room at a hotel are launching a legal challenge with the help of civil liberty advocates.
Rebecca Nash and Hope Stubbings were allegedly denied the hotel room at the Brunswick Square Hotel in Brighton because it only accepted 'couples and families'.
"Laws prohibiting hotels and guesthouses from discriminating against gay men and lesbians have been in place for four years now, but clearly the message still isn't getting through," said James Welch, legal director of Liberty, which is bringing legal proceedings against the hotel on the couple's behalf.
"With the Equality Act 2010 now in force, my clients intend to show that they have as much right to enjoy a quiet weekend away together as any other couple."

Read more from article by Ian Dunt in politics.co.uk.
at 16:10