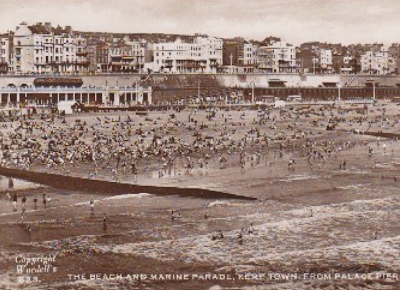 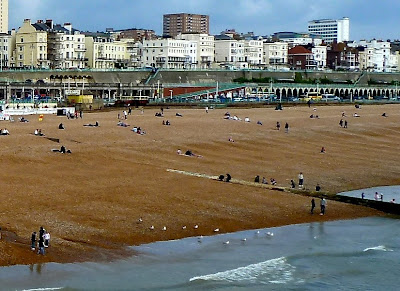 About 80 years separate these two photos. From the 1920s onwards the area immediately to the south of Eastern Road, between Upper Rock Gardens and Montague Place, was subject to much piecemeal slum clearance. With the interruption of WW2, the site remained undeveloped for several decades, and the block of flats, Essex Place (centre top in lower photo), did not obtrude on the scene until the 1960s. A corner of another block, Hereford Court, from about the same time, can be seen on the extreme left.   Although one would not want to see any more tower blocks on the skyline, the visual intrusion of Essex Place is not unpleasing, serving something like a punctuation mark in the long sweep of Marine Parade.

Over to the right is the hospital tower mentioned in the earlier post,"Architectural fantasia".

Another noticeable change is the accumulation of shingle that has occurred over the 80 years, such that most of the length of the groynes is now concealed.