The "Dress for Excess" exhibition has regency costumes displayed in several rooms throughout the Royal Pavilion, which provides near perfect settings. The display culminates in a new exhibition room, the Prince Regent Gallery, dedicated to George IV's coronation.  It is good to see more of the Pavilion being brought into use to offer even greater value to the visitor, and particularly appropriate that it should be used to highlight George IV's extravagant tastes without which the Royal Pavilion would not exist at all.

George was intensely interested in clothes all his life and succeeded in running up a tailor's bill for £1.5 millon at today's prices. His coronation in 1821 provided an ideal opportunity to indulge his tastes for pomp and opulence and ended up costing £15 million (today's prices), the most expensive coronation in history. His crimson velvet, ermine-trimmed, processional mantle is shown in the picture below. George, not content with the normal length requiring 3 bearers per side had it extended to 16 feet to accomodate 4 bearers per side. After his death 10 year's later his successor, William IV, disdaining all such extravagance put the entire coronation costume collection up for sale and the mantle was bought by Madam Tussaud. It now forms the highpoint of this exhibition which is worth a visit for this item alone. 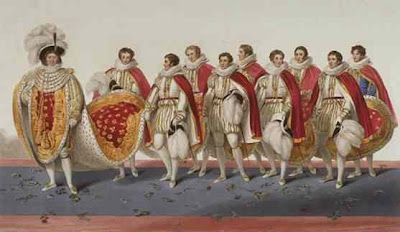 The Coronation in Westminster Abbey:- 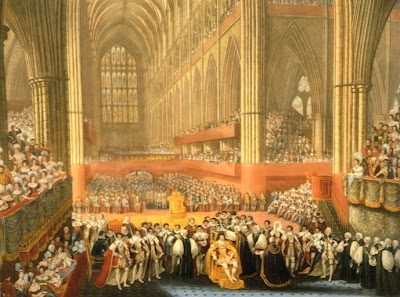 The exhibition commemorates the passing of the Regency Act on 5th. Feb 1811 and continues until 5th. February 2012. Next year will mark the quarter-millenial of George IV's birth.
at 21:01