West Street was originally much narrower than shown here. The eastern (r.h. side) was widened in 1868 and the Academy cinema on the same side built in 1911. Widening of the western side did not start until 1928 which dates this picture to the period 1911-1928.

On the corner of Boyces Street, the Half Moon lasted until at least 1970 when the licensee was a 'Gizzi', a family more usually associated with Italian ice cream. Although at first sight the building now looks completely different it seems to have retained the same fenestration even though it has had the roof replaced.

Of the two buildings up from the Half Moon, 61 West Street with the canted first-floor bays appears still intact, but 62 with the elegant first-floor bow window has been replaced with modern mock-Georgian. 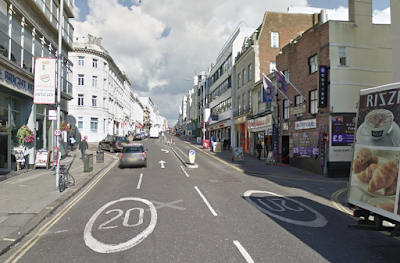 The building that replaced the Academy deserves no comment.