A Plaque to Minnie Turner 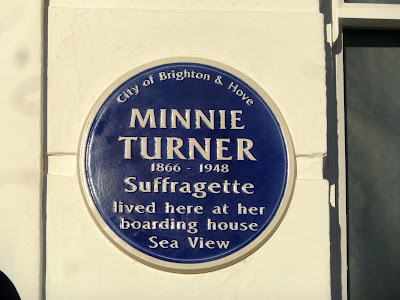 The first of a series of plaques planned to commemorate the centenary of a significant period in the Women's Suffrage movement was unveiled today at 13 Victoria Road. Minnie Turner ran her boarding house Sea View as both holiday destination and refuge for suffragettes recovering from imprisonment, hunger-strikes and forcible feeding.

Minnie was present exactly 100 years ago today when suffragettes marching to Parliament were violently attacked by police for six hours. Also present were several of her former guests and, in particular, her boarder, Mary Clarke, the WSPU organiser for Brighton, who later tragically died.


Minnie Turner was for 12 years the Honorary Secretary of a branch of the Brighton Women’s Liberal Association and a member of the National Union of Women's Suffrage Societies (NUWSS). In 1908, frustrated at the government’s refusal to grant women the Vote, she joined the militant WSPU.

Minnie expressed great pride that more of the suffragette leaders and speakers had stayed with her than in any other home.

The plaque was funded by the City Council with a contribution from the Brighton & Hove Heritage Commission.